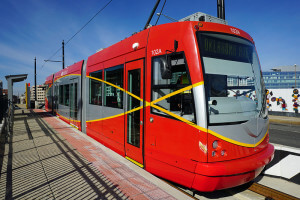 Streetcar service ended in Washington DC on January 28, 1962. But the nation’s capital is bringing them back, starting with two lines serving H Street/Benning Road and Anacostia in 2013, and extending to 8 lines in all. Go here to check out the plans.

I attended The George Washington University for grad school in the late 1990s and got to be old acquaintances with the DC Metro. However, the Metro’s purpose is clear: opened in 1976 after the era of urban flight, the DC Metro was meant to move commuters from the suburbs into the city for work, and back. Move ‘em in, move ‘em out. If you wanted to move neighborhood to neighborhood, you were left to the bus, where improvements lagged.

Streetcar service trumps buses when it comes to community investment. Buses can disappear any time. Streetcars require rails and overhead wires, which lends permanence to the service, and encourages further real estate and commercial development than bus lines. Noise? I’d rather listen to the gliss, squeal, and clang of a streetcar going by than a bus engine any day.

Streetcars didn’t fail – they were pushed out of business by the auto industry. The National City Lines/General Motors scheme began in 1936 by buying and stripping away 45 cities’ streetcar systems by 1950, and replacing them with buses as a way to boost the auto industry business. Read this Washington Post article by Ashley Halsey III marking the 50th anniversary since the end of service, and the return of streetcar service.