Home→History→Genealogy→Vaccination – for one, for everyone

The year is 2012. One of the greatest inventions to bolster human health – vaccinations – are a part of history. Scientists have spent over two hundred years creating vaccinations to prevent lethal and crippling diseases that threatened families, towns, countries, and continents. They are the reason we do not have to cross our fingers in the hope of living to a ripe old age. 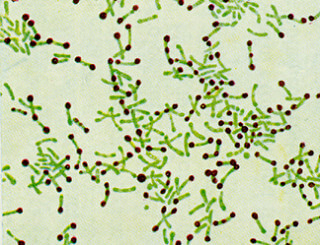 Yellow Fever in 1937. Seventy-five years ago.

We’ve had the benefit of vaccinations that prevent crippling and mortal diseases for decades.

DTP (diphtheria, tetanus, and pertussis) was created in 1930. Eighty-two years ago. Today, a slightly altered form of the vaccination, DTaP, is administered.

So why are there 549 cases of pertussis, or whooping cough, in Washington State already reported for 2012 alone? ABC News reported this on March 28. At this point last year, only 88 cases had been diagnosed. Adults whose immunity waned after their childhood vaccinations are now at risk due to unvaccinated children. In turn, pregnant mothers who have pertussis can infect their newborns. This article reported that between 2004 and 2008, 83 percent of pertussis deaths were children under three months old.

Let’s talk about a different part of the DTaP vaccination: diphtheria.

Diphtheria is caused by the bacteria Corynebacterium diphtheriae. Its signatures are a gray/black membrane in the throat, swelling of lymph nodes and the neck. The bacteria releases toxins in the bloodstream that attack other organs, and can do significant damage to the heart.

On February 3, 1906, my great grandfather lost his twin brother, Cecil, and his infant son to diphtheria. The death certificate below notes that Cecil had suffered for 3 weeks, before the toxins associated with diphtheria caused his heart to stop. The infant, unnamed, was buried with him. The infant is only known through family history – it does not appear on Cecil’s death certificate or on his tombstone. We only know Cecil’s wife’s name because it was written on his death certificate. He died in his mother’s house near Havre de Grace. 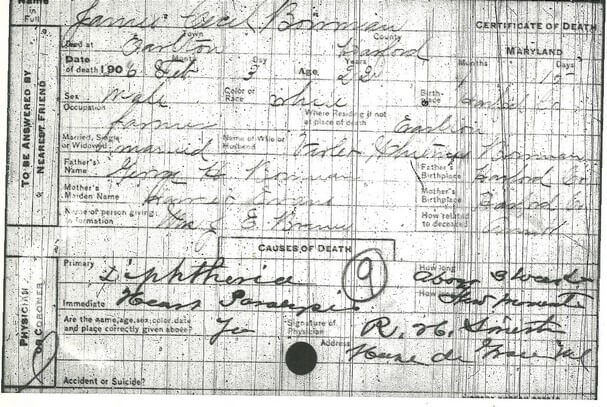 When parents opt out of vaccination, they only risk their own children’s lives, but the lives of others within their community. Vaccination only works when everyone participates.  Prevention is always cheaper than treatment, especially when there is a great risk that treatment may not be enough, even in this modern age (10% of diphtheria cases result in death). My great great uncle died before vaccination was an option.