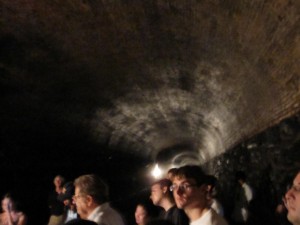 Group listening to Bob Diamond of BHRA in the tunnel under Atlantic Avenue, Brooklyn. RL Fifield, 2010.

Until December 2010, at the intersection by the Trader Joes on Atlantic Avenue in Brooklyn, you might find a few traffic cones surrounding a popped manhole cover. Dozens of people queued on the nearby sidewalk. Between green lights, a few people would cross the street to the area in the middle of the intersection, and one by one, slip below the asphalt on a household ladder sticking out of the manhole.

We took part in one of the last tours by Bob Diamond, who rediscovered the subway tunnel in 1980. The tunnel is the oldest subway in the world: it was constructed using cut-and cover technology in 1844. Until the creation of the tunnel, trains, wagons, horses, and pedestrians all used the surface of Atlantic Avenue, all the way to the riverfront.

The tunnel is almost completely black, except for a few lights strung along the side and flashlights carried by participants. It’s rough going over the floor of the tunnel; the tracks were removed before abandonment and the floor is rutted and pitted. Above is the beautifully vaulted brick ceiling is pierced by dark ovals, once used to let smoke escape the tunnel.

Bob Diamond is a figurehead of the BHRA: the Brooklyn Historic Railway Association. For the last 30 years, the BHRA has been attempting to reignite streetcar service in Brooklyn, especially in transportation-underserved Red Hook. I love the BHRA – they are an organization that respects the past, and looks toward the potential of rail for the future – all with a can-do grassroots spirit.