I was compiling a list of objects with a Maryland theme from the Metropolitan Museum of Art’s collection for the fun of it. My mother’s family has been rooted along the lower Susquehanna and Chesapeake Bay for nearly 400 years. It was fun to find this early nineteenth century watercolor of crossing the Susquehanna at Wright’s Ferry, described as being near Havre de Grace. Nearly fifty miles away, I would hardly describe Havre de Grace as being near present day Columbia, Pennsylvania, once known as Wright’s Ferry. It helps to think in context. During the 1811-1813 period that the artist, Pavel Petrovich Svinin, traveled through the mid-Atlantic, Havre de Grace was possibly the largest town and was accessible just down river – the river was the road of the time. Svinin was the Secretary to the Russian Consul-General and was based at Philadelphia. Many of his watercolors survive in the Metropolitan’s collections, and include scenes of many events of protestant religions present in the mid-Atlantic, water scenes, and cities. In looking at this watercolor, I particularly enjoy the lady and her chaise, and that she seems to be surrounded by others of different classes. The ferry at Wright’s Ferry was first an animal powered ferry, but due to traffic, flat boats, canoes, and other conveyances were used to ease long waits to cross the river. 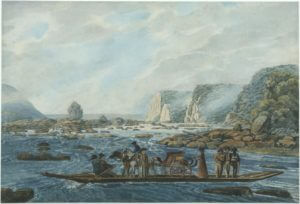