After a boozy brunch with Dr. V’s cousins, we wandered up the sunny side of the street to Grand Central Terminal, celebrating its 100th anniversary this year. 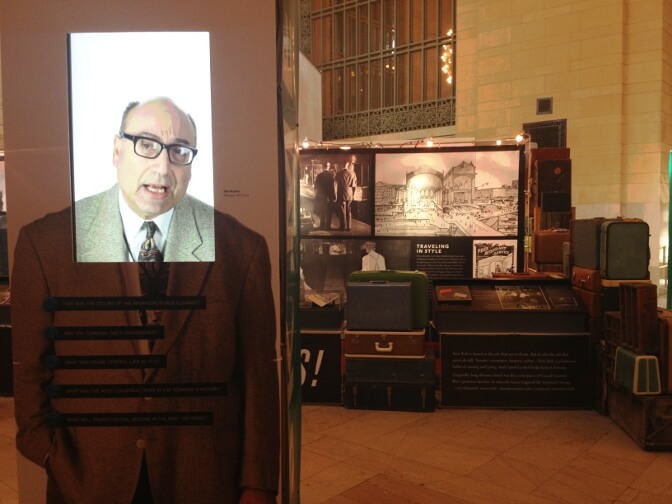 The kiosks were great. You can ask about various GCT topics at the push of the button. When they aren’t talking, they just look around and look bored. A former customer service manager relates that GCT before the renovation was “a hell hole.” RL Fifield 2013.

The former waiting room space is used for exhibitions and events, and currently is home to Grand by Design: A Centennial Celebration of Grand Central Terminal. It’s rescue from demolition in the 1970s definitely gives us something to celebrate. And the exhibition is fun – lots of piles of suitcases, ASK ME booths with Metro North officials talking about Grand Central on video monitor, and lots of material culture and photos that make you wistful for the golden age of rail.

I particularly love New York Central’s children’s menu, where chicken nuggets are notably absent (tomato soup! creamed chicken! real food for children!). The exhibition continues by discussing the East Side Access project, where LIRR commuters will be able to arrive on the east side of the island, rather than continuing to Penn Station on the west side of the island.

Would it be too much to ask for limited Amtrak service to return to Grand Central? Please? Penn Station is killing us! Long live the headiness and adventure that is Grand Central.