What’s great about New York City? People on the streets.

In June 2012, the NYC Department of City Planning enacted zoning that requires new commercial development to fit within maximum frontage limits in the Upper West Side shopping districts along Broadway, Columbus, Amsterdam, and its cross streets.  They claim that the density of residences and limited commercial space within the neighborhood makes this zoning plan ideal on the UWS. But I think it’s a plan that works for more than just the UWS. On the Upper East Side, compare Lexington Avenue in the 70s versus 1st Avenue in the 70s. Lexington Avenue is full of small stores, where a one block walk will take you past ten concerns, on just one side of the street. There’s a vibrancy in the flowers, pizza, bodega electronics, shoes, the stairway into the subway, the coffee shop offered in that short stretch of street. But on 1st Avenue, you might have to walk past Duane Reade for part of the block and D’Agostino grocery store for the other half. Meh. It isn’t as vibrant, and it creates spaces that Mom and Pop/independent stores could never hope to fill.

What’s ruined a lot of American cities? Creating mega stores that cater to the driving public (and wrecking historic buildings for parking lots) where small stores that contribute to vibrancy used to exist. And right now on the Upper East Side, that increasingly means big banks. What about this modern age of electronic banking requires 4,000 square foot stores in a pedestrian city? 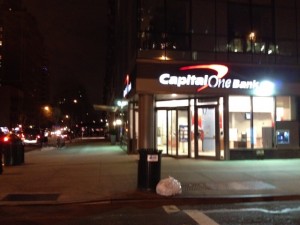 Yet another freakin’ bank. A pestilence of banks invades the Upper East Side. RL Fifield photo 2012.

When I moved to the neighborhood in 2006, the corner of East 79th Street and 3rd Avenue housed nearly 10 vibrant business on it’s SE corner in late 19th century tenements. A bakery, dry cleaner, popular restaurant, poultry market, and thrift store were located there. For at least the last 4 years, its been a blighted construction site, and the ground floor is being arranged as a single commercial space. Time to reference Jane Jacob’s ballet of the streets (read an NYPL blog post on The Death and Life of Great American Cities here). Suburban dwellers who drive don’t think about what a single bank means to street life – it deadens that portion of the street after 9pm. The street becomes less safe.

There’s something to be said to returning to stores of human scale. After living in the city for many years – New York City, mind you – I’m often overwhelmed by the vastness and hubbub of a typical suburban Target store.