Eddie Izzard puns on the Church of England: “Cake or Death?” For people found guilty of committing small crimes in England, transportation to the American colonies for seven to fourteen years of bound servitude was the cake option. Overcrowding in England’s prisons made transportation seem like the perfect option – just get the petty thieves out of here, much to the chagrin of Maryland, where most convicts arrived.

Within my study of the dress of indentured and enslaved runaway women 1750-90 (which used to be available free online, but I see that’s changed) at least fifty of the 1000 women are recorded as convicts, also colloquially known as “His Majesty’s 7 Year Passengers,” which related to the 7 year term of labor most of them served.  Using the The Proceedings of the Old Bailey: London’s Central Criminal Court 1674-1913 website, I can find the trials that sent some of my runaways to the colonies. Many of these trials includes theft of clothing and textiles – the Old Bailey proceedings are treasure troves for the researcher of dress, textiles, and the lesser sorts.

Isabella Watson was tried for violent theft in trying to rob 2 guineas from George Grace. She was acquitted of the violent theft, but was sentenced to Transportation for stealing the money.  Once she was sent to the colonies, she ran away twice: once in 1764, and again in 1768. Connecting the dots between these various sources reveals much more of the lives of working women otherwise forgotten. The transcript of the court case from September 14, 1763 is followed by the runaway advertisements.

Isabella Watson , spinster , was indicted for that she, together with another person, unknown, did put George Grace in corporal fear and danger of his life, in a certain dwelling-house near the king’s highway, in the parish of St. Bride’s, and violently taking two guineas from his person, his property , July 28 . ++

George Grace . On the 28th of July I was going home to the Bull-and-gate, in Holborn, from White-chapel, about 2 in the morning; going down Fleet-lane stood two women, one of them asked me if I would go and see her lodging; I said, with all my heart; I went with her, she asked what I would drink? I said, a pint of porter; she said, she would have a pint of wine; I said, I could not afford it; then the prisoner came in, and asked me to pay for the wine, (something was brought, but I did not taste it) I said I had none, and would not pay for any; then she laid hold on my throat, and held me backwards on an old bedstead, till they took two guineas out of my pocket, there was nobody else in the room at the time; I said, if they would not hurt me, I would pay for the wine; the other got off, and I laid hold of the prisoner; she got up one pair of stairs, I still kept hold of her, and called for the watch, as we were coming down stairs a man got between her and me, she got out at the shop door, and I at a passage door, both into Fleet market; the man crossed me two or three times, as I was running after her, she ran into a sort of a butcher’s slaughter-house, there I took her, and charged the watch with her. I believe I was not above five minutes in the lodging. William Chamberlaine, the constable, deposed, that the prosecutor and prisoner were brought to the watch house, he gave charge to him of the prisoner, for robbing him of two guineas, upon which he, and Thomas Newbury , went to the house, and in searching the room, where the robbery was said to be, Newbury found two guineas in an old chip hat, between the sacking and the bed; that before they went the prosecutor had told them one of the guineas was a little crooked, and one of them appeared as he had before related. (Produced in court.)

The prosecutor being asked, said his money could not have fallen out of his pocket at all, his breeches not being unbuttoned, and that he had not been in the room above three minutes before they robbed him.

The prisoner said nothing in her defence.

Guilty of stealing the money , T[ransportation]. Acquitted of the robbery.

Runaway advertisements for Isabella Watson. Note the 1768 advertisement indicates that she arrived in the colonies in 1764. 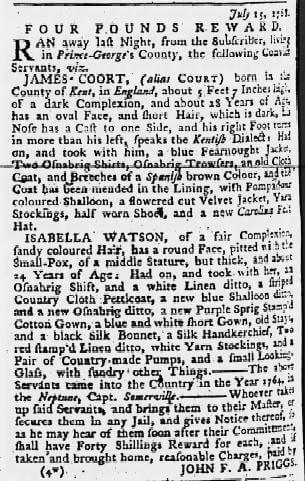