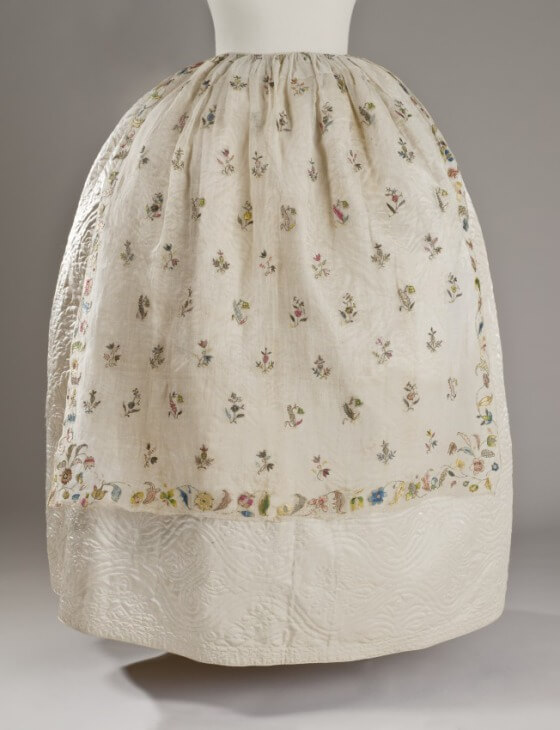 An embroidered apron at LACMA, similar in concept to those depicted in the Winterthur fraktur below. M.2007.211.131

I’m not a Pennsylvanian German scholar, but I love considering the depiction of 18th century dress in the ebullient art form of fraktur. What is real? What is fancy? Can we trust depictions of women when they hold gargantuan sprigs of flowers in their hands? Do we trust the printed or embroidered sprigs on these women’s aprons? Their caps have black cauls (the crown portion) and white headpieces (the brim), components occasionally viewed in folk costume. In 18th century newspaper runaway advertisements, “black”, “dark”, and “German” caps are described on the heads of Magdalen Hackaliver (ran away 6/23/1756), Charlotte Maria Conrad (8/11/1755),  and Anna Elizabeth Hesselbach (8/28/1788). The chevron shapes around their necks evoke handkerchiefs, but is the color on their cuffs just artist caprice? Documentation of working women piecing printed fabrics onto their gown cuffs can be found in runaway advertisements, and is found in extant baby clothes preserved in the London Foundling Hospital billet book collections, housed at the London Metropolitan Archive. Check out Threads of Feeling, an exhibition organized by John Styles and The Foundling Museum – it’s just opened at Colonial Williamsburg.