Home→Uncategorized→Do Something Good for the Country on Black Friday: Don’t Shop Walmart

I don’t shop Walmart any day. I’m asking you not to shop it today. 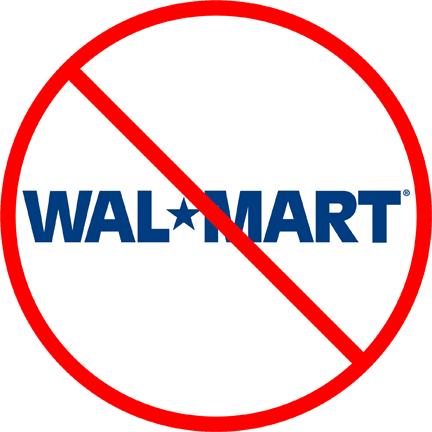 In 1995, I started a personal boycott against Walmart that lasts until this day. If you revere small town America, then cut back on spending at big corporate America. It’s true that much of our choice in local retailers was obliterated by decades of white flight to the suburbs, the mall-based chain store, and mergers of large retailers. People liked parking lots for their cars and one stop shopping. It’s true; you will pay more at independent stores. But I’ve balanced this by buying less and trying to select companies that have fair worker compensation and a blue profile. Are we really getting back something good as a country by saving a few dollars at Walmart?

No. We are decidedly allowing Walmart to suckle local resources through tax breaks, welfare and food stamps for their underpaid staff, and road improvements to reach their stores. Don’t be fooled. This isn’t good business for our communities. This is destructive. Recently, the news of a Walmart-hosted food drive – for their employees to bring in food to donate to other impoverished employees – has kept the spotlight on their poor employee compensation. Stephen Colbert put the icing on it.

Watch Walmart: The High Cost of Low Price for more information. Try to feel good handing over money at Walmart after watching.