Home→Architecture→The Zoo, the Park, and a Baltimore Befuddlement

I’m not an expert on Baltimore, by any means. I’ve never lived there. I was born in Towson and grew up in Carroll County. But Baltimore was my first exposure to City and all that big “C” entails. The redeveloped Harborplace of the early 80s. Field trips to the National Aquarium, before it was $35 per person. Seeing traveling Broadway productions at the Morris Mechanic Theatre, now being turned into brutalist rubble. It pains me to see the amazingly beautiful stretches of Baltimore neighborhoods underused. 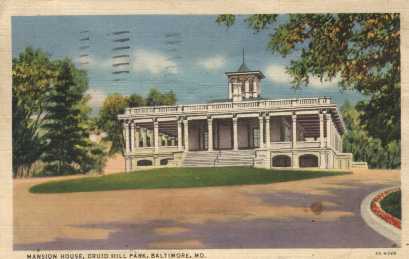 A 1921 Postcard showing the Mansion House, 1801, turned into a mid-19th century pavilion at the Zoo. Rootsweb.

We visited the Maryland Zoo in Baltimore last weekend (terrible name, change it back to Baltimore Zoo as soon as you possibly can, regardless of who is footing the bill). I don’t think I had been by Druid Hill Park since my last visit to the zoo 30 years ago.  Baltimore, its fine bones seen from train or car window, is a place worth restoring. Easy access to interstates and suburbs and the gutting of public transportation caused a fast and sudden osmosis of talent and neighbors in the 1950s and 60s. The collapse of industry in the 1980s finished off many other human resources.

Driving past Druid Park, I thought of what was, and what could be. The Zoo is rather fascinating in terms of its long institutional history. With roots extending to the 1860s, there are institutional artifacts littering the property. Other institutions may have torn them down, but they provide fascinating layers of cultural heritage to view. Why not celebrate that heritage with some interpretive signage? (Disclaimer: I could have missed labels, now that I have a son). Instead of taking the tram from the entry gates, we walked to the park, past stone foundations of unknown purpose. Ancient pagoda-like wood aviaries (possibly?) sat behind a “Staff Only” sign near the entrance. My father remembered visiting the zoo in the 1950s, when you could drive through it. I think that the relics of the many previous incarnations of the zoo tell a great story on their own and deserve interpretation.

The grand Mansion House Pavilion (1801) belies the donation of the Rogers Family of their estate to Baltimore during the mid-19th century parks movement. Entry to the zoo takes you past the fantastical Howard Peters Rawlings Conservatory and Botanic Gardens of Baltimore. Late nineteenth century bits of revival architecture litter the landscape, speaking of former fountains, rail lines through the park, and other social ideas left to deteriorate. During my years here in New York, I’m amazed at what types of structures can no longer exist within my adopted city due to its ravenous developers and boom boom boom mentality, but are preserved in others. 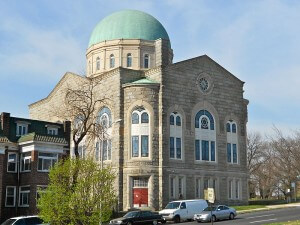 Nearby stand landmarks to public transportation, the City Beautiful movement, Jewish heritage, and more complicated stories of segregation (the white tennis courts were integrated by 24 African-American players in 1948, and arrested for doing so) and anti-immigrant politics. Shaarei Tfiloh Synagogue is a beautiful, rock-faced 1920s structure that served Eastern European immigrants until their move to suburbs like Pikesville in the 1960s. Interestingly, the Young Men’s and Women’s Hebrew Association used the Mansion House in the zoo in the 1940s for meetings.

Amazingly, the car barns for the Baltimore City Passenger Railway Park Terminal line the route. A Doorway beckons mysteriously “Waiting Room.” These buildings are rare veterans of the streetcar era and have repurposing by the MTA as a bus depot and urban blight to thank for their survival. (I’m surprised some rail fan hasn’t made this complex their mission and created an online monument to it). As noted by many streetcar-friendly urban planners and historic preservationists, streetcars foster greater economic development along their entire length than bus routes. The Baltimore streetcar lines were famous, and could be a force for revitalizing past City Beautiful investments. 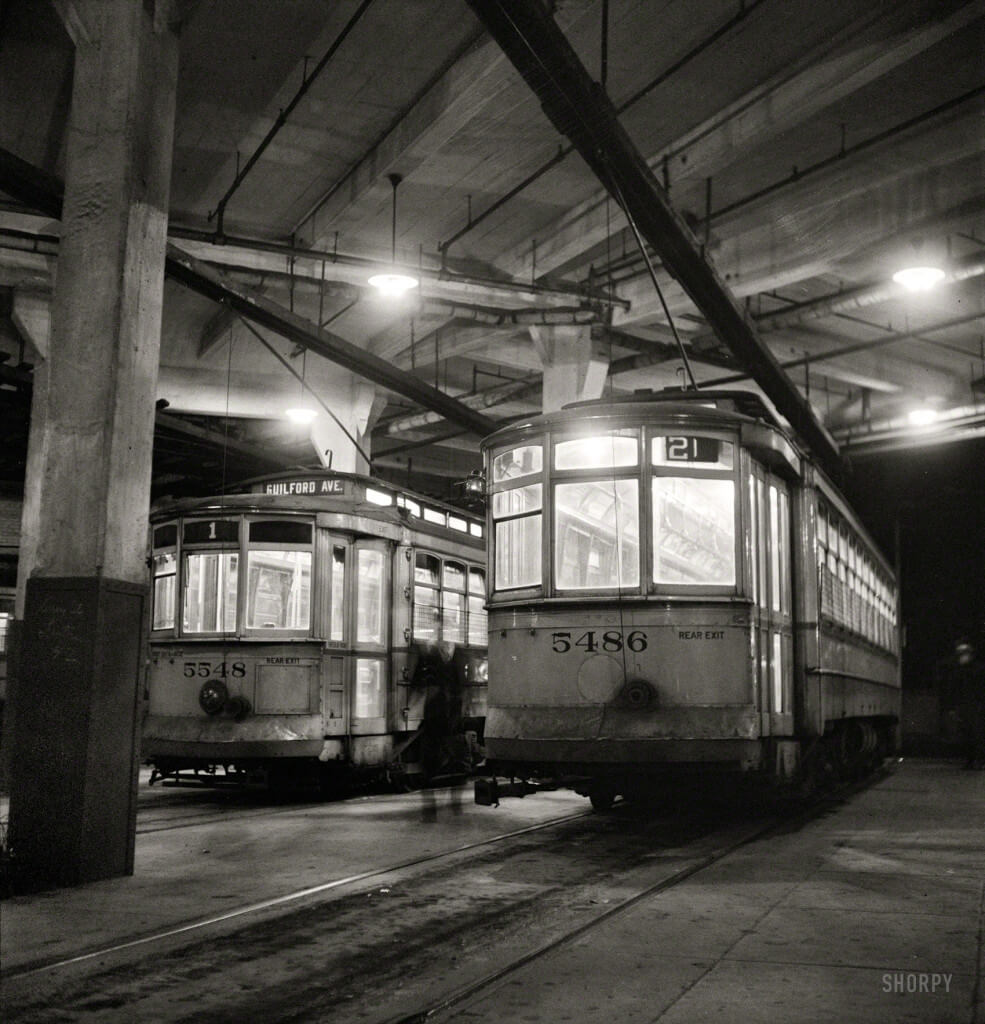 April 1943. “Baltimore, Maryland. Trolleys inside the Park Terminal at night.” Photo by Marjory Collins for the Office of War Information.