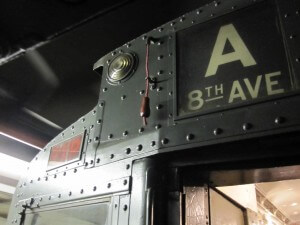 On Sundays in December, with a little luck and timing, you can catch classic New York City Subway R1/9 cars from the 1930s. It’s quite a party on the train, with railfans, musicians, and gawkers all piling on to remember transit’s roots. So climb aboard, and take a rattan covered bench, watch the heavy doors slide closed and the ceiling fans spin ’round. You can also roam the train as it rolls between stations: it’s great people watching. 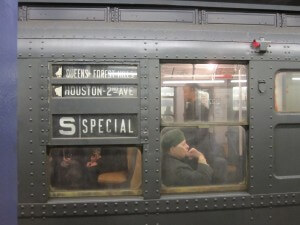 Air conditioning was not to be found in the NYC Subway until 1967, so you slide open the windows and let the tunnel breezes cool you (or not).  With the windows open, the tracks and walls are that much closer, and the sound of the train thundering through the tunnel is deafening. The grease is thick on the air, and the mechanics of the car sound different, heavier. 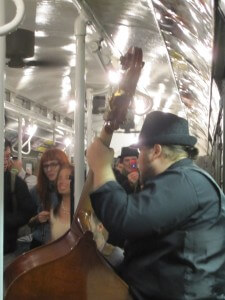 Music on the Vintage Ride, December 2011

R1/9 cars remained in service until the late 1970s. Check in late November for the Vintage Ride, which runs regular service from Queens Plaza to the Lower East Side on the M line. Let the music play! 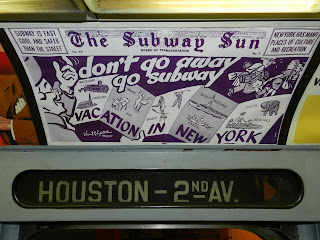 An issue of The Subway Sun – a much more fun way to share NYC Subway courtesy and advertising messages than those used today.