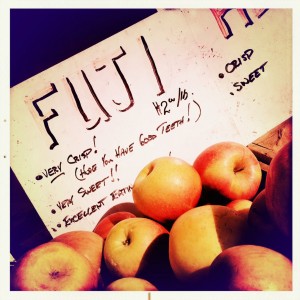 Apples at the Union Square Greenmarket, courtesy of Dr. V.

Saturday night, I had a little dough left over from the quiche I was preparing, and I used it to make a small pie for Dr. V and myself. We had picked up some apples from the Union Square Greenmarket, ones that were clinging onto last season due to the help of cold storage. As I began with my paring knife at the top of the apple, creating that long curly strip immortalized in the film Sleepless in Seattle, I remembered how I had learned to peel apples. 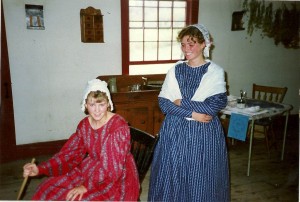 I had just stood up from sitting over coals, stirring the large pot of apple butter at the end of Caroline’s spoon. Heritage Hill State Park, Green Bay, WI, 1988.

I was thirteen. One can learn a lot of bad lessons when one is thirteen: smoking, shooting up, etc. Women generally look back on that age with a wince. It’s a time fraught with risky transition, embarrassment, and emotion, and I’m thankful I had my interest in history and museums to distract me from more dangerous pursuits. I was working as a historical interpreter at Heritage Hill State Park. My first lesson in open hearth cooking was to bake an apple crisp. We were representing 1830, so this meant in a Dutch oven, set over coals, on a brick hearth, in front of a small wood fire. 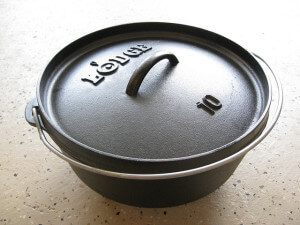 A modern Dutch oven. Coals would be loaded on the top to bake the contents within. Photo credit: boeke via VisualHunt / CC BY-NC-SA

I peeled a small basket of apples that day, probably about twelve of them. It was a game, sliding that not-so-sharp knife far enough into the flesh to keep the skin strip from breaking, but not so far in as to waste the nourishment of the apple. Then I kneaded butter, sugar, flour, and cinnamon into a crumb, and whipped cream by hand.

To this day, I’ve never made a better apple crisp than in those Dutch ovens. And perhaps I do have a bit of peeling pride.