I fully expect Masterpiece Classic’s Downton Abbey to inspire the costume choices of many next Halloween (see my post on Downton Halloween costumes). Dr. V and I clung to the compelling story lines from above and below stairs every Sunday evening. We even rushed home from our Super Bowl party to stream that night’s episode online. For years, Halloween parties have often had a French maid character, but will people take cues from Anna the head housemaid, or Mr. Carson, the butler? More likely, Halloween celebrants will choose above stairs characters for their inspiration: the Dowager Countess, Lady Mary, and Lord Grantham. 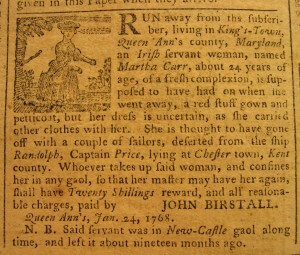 As part of my research on 18thcentury working class clothing, I have been studying an altogether different kind of servant: the indentured and enslaved female servants who immigrated to the American colonies. Many of our ancestors came to the colonies this way, either by choice or capture. They served as house servants, assistants in their master’s businesses, and agricultural laborers. Most women servant immigrants had no specialized occupation or training, compared to their male counterparts. For the servant who decided to run away from the household, their master would post a newspaper advertisement for their capture. To help in their identification, the master would list the clothes the servant might be wearing, whether they belonged to the servant, or if the servant had stolen them upon her departure. 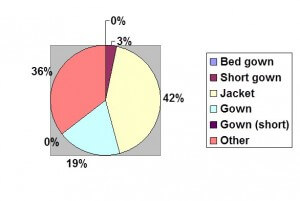 A chart showing the distribution of upper body garment data for enslaved women in Georgia, North Carolina, and South Carolina, 1750–1790. The other category includes garments such as wrappers, sacks, and waistcoats. The 0% reflects that the term “bed gown” was not used for garments worn by this population. Chart: RL Fifield

I created a database that now houses records for 1000 women and their 6000 garments.  Why? Anybody got a photograph from 1750? (for those not in the know, photography sprung from work done in the 1820s and 1830s). Poor and working women are the invisible population in history.  Unless they did something exceptional, such as runaway or commit a crime, most immigrating women of the lesser sort are not documented at all; their history is lost. This is especially true of enslaved women. Runaway advertisements document not only clothing, but also physical characteristics, habits, skills, and other information. I started on this journey to study clothing, and to discover, if possible, elements of choice and fashion among women of the lesser sort. This data can teach textile and economic historians a lot about trade at the time, and can inform living history programs. To study these women as a group is to recover their community, rather than considering these women as spot mentions, individuals without context.

New: see the full article online here. If it doesn’t come up, go to the home page and search again.