One rider asked “How do you learn to drive these things?”

I could hear the operator sunny reply: “Operate! There are bus drivers, and streetcar operators.” 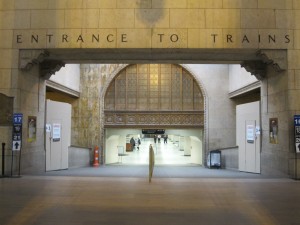 I rode the streetcar down Spadina Avenue, to Toronto’s Union Station. There, the streetcar entered a tunnel, deposited passengers in the basement of the station, picked up new passengers, and went back out on its route. We approached a switch; the streetcar operator got out with a long metal pole to manually change the switch, before climbing back in and moving forward. This isn’t a heritage line mind you, it’s a major part of the Toronto Transportation Commission system. Excellent.

I missed a trip on the lauded 501 Queen Streetcar (named one of the top 10 trolley routes in the world by National Geographic) due to business. But I’ll be back. Read some heavier thoughts on Canadian transit ridership and market share  by Stephen Rees at his blog.