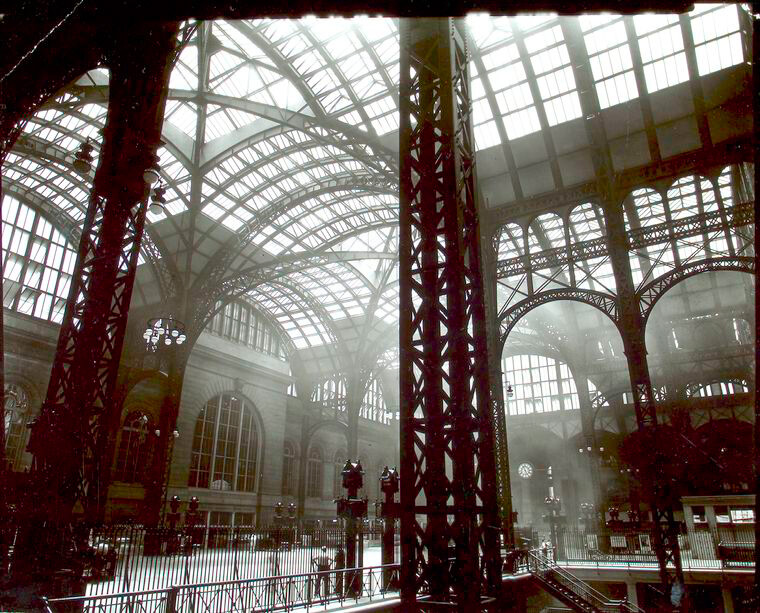 More than one website chronicles the beauty lost that was Penn Station, so I’ll skip the details about McKim, Mead, and White, Jane Jacobs, and Madison Square Garden. But every time I enter the dingy, low-ceilinged tunnels that make up the station today, it chills me to think we could lose such a landmark, such an effort, such resources. When you enter the Amtrak hall today, a few large photographs of the old station are tacked up on some pillars, as if that’s supposed to make passengers feel better. We could never build a civic structure again that looks like Penn Station. We just aren’t that kind of country any more.

A blurb about Penn Station from a short story I was writing:

Who were the men who deemed travel to be elegant in 1913, and who were the men who threw it all away 50 years later? To my mind these men were the same, throwing us and all around them away every day in a hardscrabble urge to earn, if not just grab all. Let us live with less, there is no gain in thrilling you, temporary citizens. I pushed through the people fighting for cabs, selling papers, begging for change. I passed people not paying attention at all, who had no place to be. Escalators conveyed our mob down into the fluorescent light. Forty years of black soot and doughnut grease had dulled all the surfaces and I squinted through the dingy air…People pushed and ebbed, swung to the right as others swelled, crashed, and receded, in the big blue gray station. It is modern, of clean lines, we shall have no more rapture at the masonry curlicue, Woman, there is money to be made here, we shall wear narrow ties and eschew sunlight in our public spaces. We will do these things in the dark. Waves spilled in behind me, and my time here was over, there was no place to stay, the undertow threatened. The big board called my name, and I complied.