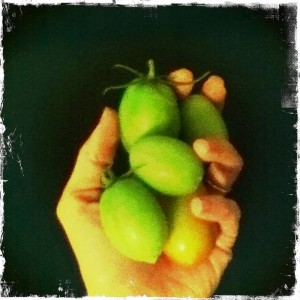 I come from a gardening family, and at this time of year, I’m biding my time until garden season. My great grandfather was listed in the 1930 Census as “Superintendent” for an “Orchard Farm.” This was Mt. Pleasant Orchard on Chapel Road, which began in 1757 and was recently destroyed by development in 2001. It has a beautiful view of the Chesapeake Bay. My grandfather’s garden had more square feet than the Cape Cod house he built in 1947. Pulling out the rototiller is a spring tradition for my parents. Even I try to eke out a meager harvest from flower pots on my Manhattan window sill. Our family suppers during the spring and summer have always been supplemented by the garden: tomatoes (of course), yellow crookneck squash, corn, asparagus, rhubarb, lettuces, onions, garlic, a staggering array of hot peppers, lima beans (of which I shelled many as a kid), herbs and lots of raspberries for jam making. Generally, gardening for us only occurs from May until September. By then, my mother has had enough. But gardening used to be a year-round activity, not just for the temperate seasons.

My thought is that winter gardening is too much work for the modern age. Gardening became less of a necessity and more of a pastime, something pleasant to do. Before freezing and canning had been invented, gardens were tended year round. Instead of a weekend pursuit, women huffed on their frozen fingers as they transplanted cabbage roots from their protected beds to the kitchen garden in February, trying to get fresh vegetables back into their family’s diets as soon as possible.

Cover your Endive with brush, cover Celery, and every thing else that needs shelter, if the weather will admit turn over your ground that is trenched, in order to mellow it, and pulverize it – Whatever will prevent delay and enable you to begin spading in February, should be done this month.”

Freezing allowed summer vegetables to be available year round. So if those flavors are preferred, then winter squash and greens are no longer necessary, especially if you don’t like them. In 2005, the German Institute for Food Research in Potsdam revealed that some of us have a gene that makes eating those winter vegetables palatable, whereas others can’t stand the phenylthiocarbamid (PTC) and propylthiouracil (PROP) found in bitter vegetables. And as Dr. V says, when I cook cabbage, cauliflower, etc., I smell green goodness, but all he smells is sulfur. However, Dr. V hails from Puerto Rico, where the only green vegetable appears to be avocado.

Perhaps Marylanders lost their appreciation for winter vegetables over the 19th century. Many cookbooks and gardening manuals from the 18th century contained seasonal information. The British Housewife, written by Martha Bradley in 1756 organized its material by month, and The Art of Cookery Made Plain and Easy (1747) by Hannah Glasse offered Bills of Fare to highlight each month’s best ingredients. By the time Jane Grant Gilmore Howard published Fifty Years in a Maryland Kitchen in 1873, this seasonal reference had been lost. Certainly, seasonal work is implied, such as with the preparation of pickles and sweetmeats. But in the section on Vegetables, both summer squashes and tomatoes butt up against cabbage and cauliflower, without any thought as to when they might be prepared. And nary a winter squash or hardy green appears. For those who would label Maryland a southern state, think again. 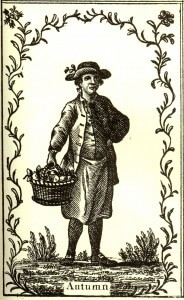 By the time I was enjoying my grandfather’s garden in the early 1980s, the yield was solid summer: tomatoes, yellow squash, lima beans, corn, and a lovely row of red raspberries. I’m by no means an expert, or even intermediate gardener. I know how to set up a garden, but that’s it. But with the new interest in that which is home grown, locavores are relearning winter gardening. Check out one site here. Much winter gardening requires the use of frames, covers, and banking plants with mulch – just as it did in the 18th century.