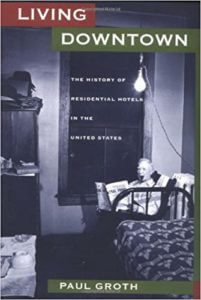 Single room occupancy. For country kids like myself, this form of spare urban housing lives under the radar. SROs refer to permanent residency in hotels. Technically, this refers to everything from high style at The Plaza to sleeping on the floor of a police station basement on the Bowery. In Living Downtown, Paul Groth outlines urban housing for those who did not choose, or could not afford, a single family home. SROs exist today primarily in large cities like New York and San Francisco, but many smaller cities and towns have been home to them too. 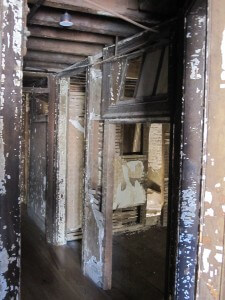 The South Street Seaport Museum recently reopened under the auspices of the Museum of the City of New York after closing under financial duress last year. While many of their spaces have been filled with art installations and temporary exhibits, remnants of the buildings’ original purposes are still visible. One of the early nineteenth century commercial buildings that make up the complex once served as a hotel. Within the building, the museum has preserved a warren of cubicles that seaport workers used to call home. The windowless bunkers were ventilated only by transom windows which opened on an airless hallway.

SRO housing has long been seen as the habitat of the disreputable fringe. Some SRO residents seek a spare lifestyle, independence, or freedom from the maintenance of property. Residents of SROs can be elderly, recovering from substance abuse, or mentally ill, and may be priced out of the apartment market, but can afford a small room. Early 20th century social reformers drove many SROs out of business, thinking their residents would choose acceptable housing choices, such as single family homes. The closure of SROs often led to homelessness among the working classes. Today, some organizations such as SRO Housing Corporation in Los Angeles are bringing SROs back, reinstating this level of housing combined with social services.