Make sure you slip in that “th.” Bar-thelona. Crazy architecture. Eating dinner at 9:30 pm there means you are dining with the elderly set. It didn’t matter that I had packed my luggage for  hot and sunny, and I arrived to a raw and rainy fifty degrees (or whatever the equivalent was in Celsius). It didn’t matter than I came down with the worst cold in years while I was there.

There was just too much going on to sit still. 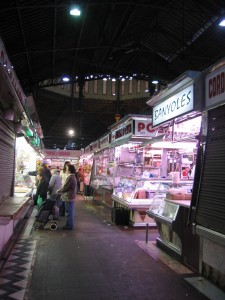 But the markets were what caught my attention. Many  American markets and their buildings were shuttered, demolished, or repurposed as flea markets around the time of urban flight and the rise of the suburban grocery store. I am fascinated by European markets’ wealth of offerings and the faces behind the counters.

I went to four in different sections of the city, from the posh St. Catherine’s to La Boqueria. At the Mercat St. Antonio, I found the food market wrapped with a market of clothing and other goods – lucky me, as I had left my raincoat at home. 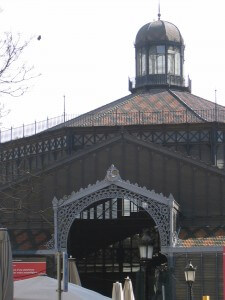 The market in El Born served as the fruit and vegetable wholesale market from 1878 to 1977. During plans to convert it into a library (how cool would that have been), ruins of medieval Barcelona were found below. The preserved market building roof now serves as a shelter to preserve the excavated ruins.

When I return to Barcelona, it’s going to be for at least two weeks. I’m going to let an apartment in one of those Art Nouveau apartment buildings with their little concierge booth at the front. I will stock the kitchen with ingredients from the market, and craft meals for my friends.

For some Barcelona cooking inspiration, visit the website of Origens restaurant. They offer several recipes of the regional cuisine they offer in their restaurant. For US travelers going to Barcelona, this restaurant is a distinctly non-touristy restaurant open at a touristy dinner hour – I was able to get and incredible dinner here at 7:30pm – and you can take the menu/magazine home with you.