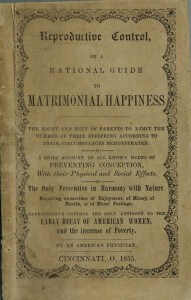 Daniel Winder wrote and published Reproductive control, or, A rational guide to matrimonial happiness: the right and duty of parents to limit the number of their offspring according to their circumstances demonstrated : a brief account of all known modes of preventing conception, with their physical and social effects : the only preventive in harmony with nature, requiring no sacrifice of enjoyment, of money, of health, or of moral feelings : reproductive control the only antidote to the early decay of American women, and the increase of poverty in – wait for it – 1855. That is one hundred fifty-seven years ago. You can read it online at the U.S. National Library of Medicine.

Winder, both minister and physician, noted that many pamphlets had come before, that misled couples with erroneous knowledge, ineffective birth control methods, “self-abuse,” and vague discussions of venereal diseases. While God is mentioned quite a bit in this little pamphlet, he does note that birth control is not in conflict with religion. Winder chides “Should the reader’s religious prejudices be crossed by any proposition made in my book, I beg him to muster up his moral courage, assert his independence, dignity, and manhood, and follow me through, before he makes up his final decision.”(9) Succinctly: man up. Interestingly, in this sentence alone, Winder outlines his intended audience as husbands, rather than women seeking birth control themselves. The all-male birth control review panel in the House of Representatives further demonstrates how many of our lawmakers are from 1855. Progress? 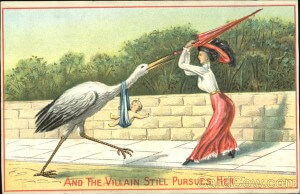 Prior to very effective methods developed in the second half of the twentieth century, there were a range of fallible and dangerous methods that women used to prevent pregnancy, which you may examine in a slideshow on the history of birth control from Newsweek/Daily Beast. Dr. Winder discusses the failing of many of these methods, finally promoting cold water douche as the only safe and effective method available in the mid-nineteenth century. Douching is not even recognized as a method of birth control today, as it is shown 1) to not be effective, and 2) not good for you.

But the most plaintive request from this document is this: let’s decrease the early decay of our women brought on by excessive childbearing, and prevent poverty. This has not changed. Women were making choices to limit the size of their families as soon as reliable methods were available. Within my own family, the number of children born by my four great grandmothers (2-3 children, with one bearing 5) was significantly lower than those born by my eight great great grandmothers (one bearing two prior to widowhood, the rest averaging 5 children, with one bearing 10 children, and another 14). Birth control allows women to lead the lives they want, and families to shape their quality of life. Ignorance of the history of why unfettered access to birth control is so critical is a luxury that we cannot afford.

As Widner noted, “The desire to understand how to exercise this control and prevent contraception at pleasure, is universal, and seems to be innate in mankind.”(5)