I had been warned that Albuquerque wasn’t much. 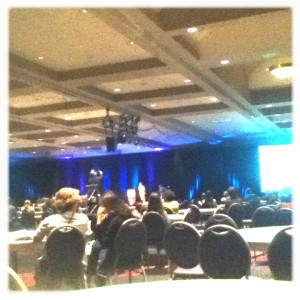 What I saw most in Albuquerque: the AIC meeting at the Albuquerque Convention center.

Last week, I attended the American Institute for Conservation of Historic and Artistic Works annual meeting. Much of my time there was observing the southwest-flavored interior of the Albuquerque Convention Center, with a few outings to the Albuquerque Museum of Art and History for a reception and Los Equipales Mexican Seafood Restaurant, where much fun was had with friends from the Textile Specialty Group and the huitlacoche, black bean, and corn tostadas were delicious. 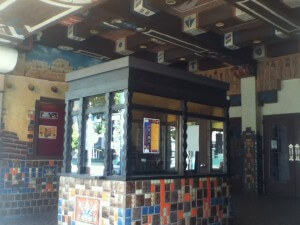 But it’s apparent that urban renewal left a devastating mark on Albuquerque, and the city is a pale shadow of its former self.  While several office towers dot the downtown area, few people are seen walking to them, even during rush hour. Between my hotel and the convention center, a “civic plaza” had been created, but was largely devoid of human activity. A charming main street area lines the historic corridor through Albuquerque created by Route 66, but again, few stores were populated and the sidewalks were empty. Still, I found a great egg and ham sandwich at Nick’s Crossroads Cafe, near the incredibly wondrous Pueblo Deco Kimo Theatre, built 1927. 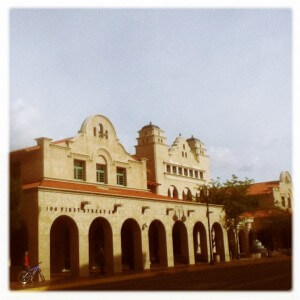 Alvarado Transportation Center, built in the 2000s in the image of the Alvarado Hotel, demolished 1970. RL Fifield Hipstamatic, 2012.

While I was there, I made my obligatory stop in at the train station, just a few blocks from the convention center. The Alvarado Hotel was a Harvey House establishment, one of nearly 84 elegant rail-side restaurants and hotels established by Fred Harvey and his company during the late 19th and early 20th centuries. Sadly, the old rail hotel and station, formerly the Alvarado Hotel, were demolished in 1970, only to influence the rebuilding of a facility in its image in the 2000s. The shell of a Santa Fe Railway building sits nearby. Train stations are often places to be for those who have no place else to be. I got a hoot and holler from a leathery man walking by in a red shirt with too much navel showing, and a pair of handcuffs on his belt loop.

Still, I’d rather have real and ailing than posh and contrived. I didn’t make it to Santa Fe.