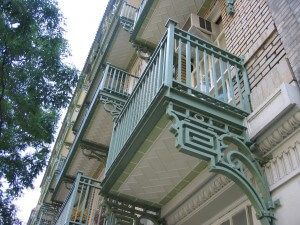 Balconies of Gustavino tile at The Cherokee Apartments. RL Fifield, 2005.

Others have blogged about the Cherokee Apartments before, and I just have the benefit of making them my home today. In a neighborhood of sagging late nineteenth century tenements and dull white brick 1960s high rises, the Cherokee Apartments are unique. The wrought iron balconies, the Gustavino tile work, and central courtyards with exterior staircases in the corners, leading to cozy, but comfortable apartments.

I wrote a paper in Dr. K’s undergrad “Gilded Age in America” class on tuberculosis in New York. The assignment required use of the 1900 census data (then on a floppy) around which a paper of any topic could be built. I decided to work with the white plague. Most people don’t realize that tuberculosis must be inhaled in order to infect; it cannot be transferred just through mouth to mouth contact. The overcrowded tenements of the Lower East Side were perfect breeding grounds for the disease.

Early in the 20th century, Yorkville, the neighborhood in Manhattan’s east 70s, became an area for social reform.  Several model tenement projects, new parks, PS 158, bathhouses, a library, and the East River Settlement House sprung up to improve the lives of the working class. The Cherokee Apartments belong to this movement. Their glazed tiles in the stairway were easily disinfected. Seats were built into the stairways for sick residents to rest. All of the apartments are arranged so they had cross-ventilation. Built in 1912, the once-known-as Shively Sanitary Tenements are gorgeous by New York City standards. They are the Apthorp Apartments of the working class.

Comprised of four square buildings, each with a central courtyard, the Cherokee houses approximately 200 apartments. My apartment, originally a two bedroom, is now a one bedroom of 450 square feet. It’s cozy, yet bright. The triple sash windows and north and south exposures makes other New Yorkers gape. 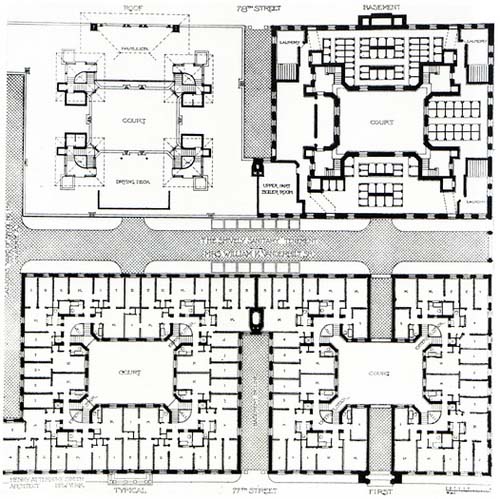 However, the primary operation, to ease the suffering of families where at least one member had fallen ill to tuberculosis, was a failure. The clinic operation closed not long after its opening, and the apartments were sold in the 1920s. Even though the apartments were small, they were still beyond the reach of many poor families. Still, their innovation in addressing one of the most troublesome public health problems led to the listing of the buildings as a New York City Designated Landmark on July 9, 1985 and on the National Register of Historic Places on September 15, 1994.

Photo: Ephemeral New York. The roof porches were later demolished, but at every shareholder meeting, someone asks when they will be rebuilt.