Home→Writing→Books→Patterns of Thought in Early America

In three short chapters, the small gem of a book Circles and Lines; The Shape of Life in Early America (2004) explores the shift from a traditional, circular path of thought to the evolution of a linear experience brought on by the modern world. John Demos, Samuel Knight Professor of History Emeritus at Yale, explores the personal letters, court cases, and autobiographies of early Americans to find language expressing the changing world view of its writers. He collects small details that might otherwise be ignored to advance understanding how life was changing around the time of the American Revolution.

I don’t intend to write a full-blown book review, but just wish to draw attention to this volume. Simple revelations allow the reader to delve into the evolving early American mind. In one instance, Demos outlines the meaning of nighttime to assist in explaining the traditionally cyclical view:

“the main thing about daytime and nighttime was discontinuity – and not just discontinuity in what they could or couldn’t do, but also in the very boundaries of experience. When night fell, the boundaries contracted enormously, so as to enclose, in the typical case, just a single household at a time. The neighbors – all the folk with whom, in the daytime, on had worked or bartered or gossiped – were now, and throughout the period of darkness to come, set apart.” (4)

In another example, Demos shows the shift in tone within memoirs, from the 17th century, during which “things happened to me” and the late 18th and early 19th centuries, when the tone changed to “I made these things happen.” The earlier memoirs demonstrated a reliance on God and “providences,” or signs, but the early modern autobiography displayed an eagerness of individuals to tell their personal stories.  Indeed, Demos notes “it’s evident overall how much these people, these autobiographers, were writing for their own benefit; they rather enjoyed the sound of their own voices (or at least the look of their own prose).” (64)

Demos writes beautifully, and Circles and Lines is worth more than one read. 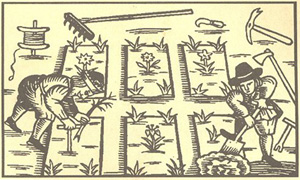