I recently attended a living history event at Fort Frederick State Park in Big Pool, Maryland. Restaurants are few and far between in western Maryland, but one of my favorites anywhere is the Schmankerl Stube in Hagerstown. I convinced friends to give it a try. Charlie Sekula is the Stube’s wonderful host, greeting guests at the door. His regionally-clad waitstaff are trained for two weeks before they are allowed to wait on guests. They are formal and polite, each using the same hand gestures to point to selections on the tray of housemade desserts. 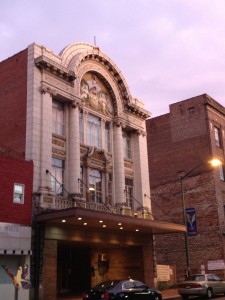 Beyond Schmankerl Stube, I had no prior impressions of Hagerstown. I remembered it as one of many slumped western Maryland towns, ones that had been important in the 19th century, but struggling to find momentum now. Entering town from the outlet mall on the highway, past the 1950s high school where I used to participate in marching band competitions is hardly Hagerstown’s best side. The passenger train station sits back from the rails. Many a storefront is waiting for a tenant. Cars sling by on I-70 and I-81, which intersect just miles from the center of town.

Rolling into town for dinner, I scratched my head. The ranks of early 19th century dwellings march up to a rolling main street with great early 20th century architecture. The dark storefronts are interspersed with restaurants full of people. Potomac street is home to The Maryland Theatre, a 1300 seat venue designed in 1915 by Andrew Lamb, who also designed one of the Madison Square Gardens in NYC. Hunky houses of the late 19th century sit around a lush park, home to the Washington County Museum of Art. This isn’t the Hagerstown I remembered. Hagerstown is seventy miles from both Baltimore and Washington DC, so it’s less likely to be a commuter town, like it’s more elegant, eastern cousin Frederick. But who knows – Frederick, the site of the second passenger station in America in 1832 won back train service in 2001. Perhaps Hagerstown could too.