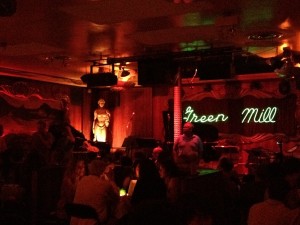 During our recent trip to see Jeremy W.(of Le Cafe Witteveen) and Tina S. in their Chicago stomping grounds, we got to check out some incredible local spots. One of them was The Green Mill, a nightclub paused during its heyday, when Al Capone used to manage it and a number of surrounding establishments, all connected by hidden basement tunnels. The neighborhood has a number of incredible old theaters, just waiting for the loving hand of historic preservation to rejuvenate them. The rattle of the nearby El helped set the vintage mood. Plop on your cloche and throw on your beads.

We pulled in after dinner. It had been 99 deg. that day, and we were fried from too much sun and too little air conditioning. Perfect timing for alcohol. 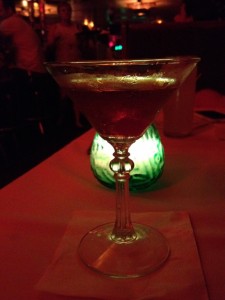 Mmmm Manhattan. Even though I was in Chicago. RL Fifield 2012.

The Green Mill is dark inside, the way old clubs are dark. Banquettes! The conversation-friendly lunette shape isn’t used enough anymore. Carved wood panels surrounded murals that could use some cleaning. Cafe tables were strewn around a stage up front, guarded by towering statue of a woman. We were taken by the Art Nouveau bar lamp, doing an Atlas routine by holding up a lit globe that was belted “SCHLITZ.” A charming but bulky bouncer asked us to whisper during performances, so there’s a code of decorum here. Up under “Green Mill,” scripted in green neon, was performing Howard Levy & Acoustic Express. Feeling cool on a very hot night.