Ancestry.com, as a genealogical tool, is a start for many doing genealogy. I see it as a way to sketch and share only. There are a lot of problems with it, but it’s certainly quicker than cranking through all those census records on microfilm like we did in the past. It allows you to get through the basic stuff, and focus on the more difficult questions, and spend more time in the archives with wills, tax records, and the like.

It’s also a sharing tool. A distant relative of mine with whom I’m not familiar contributed a newspaper article from 1897 written by my great great great grandfather, William Keyser Kilgore, and his trip to Ohio and Iowa in 1851. Today, Castle Fin, PA is not much more than a road near Delta, Pennsylvania. 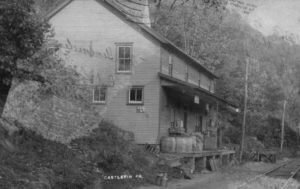 This was typed from a newspaper clipping [copy] that was sent to Gail M. Kilgore by Hazel Landreth of Springfield, VA who said this article was in her great grandmother’s scrapbook. PHILLIP WISE is the son of GEORGE and KESIA KILGORE WISE of Bellaire, OH. Keziah is the sister of JOSHUA KILGORE and the aunt of WILLIAM K. KILGORE and ELLEN DOUGLAS.  ELLEN DOUGLAS and WILLIAM K. KILGORE are also the siblings of JOHN KILGORE who moved to Biggsville, Henderson Co., IL in 1878. ANDREW CUNNINGHAM KILGORE was the son of LEVI KILGORE and nephew of JOSHUA KILGORE. JAMES ALEXANDER, father of Margaret Ann and Rachel lived in Peach Bottom Township, York Co., PA Their mother ELIZABETH McGREAGOR ALEXANDER is a native of Peach Bottom Township. The Alexander family are from Belmont Co., OH. James Alexander sold his land in Fawn Township and moved to OH.