Now on at The New York Historical Society, Beer Here: Brewing New York History reminds the visitor of the importance of beer as an industry, food, and social lubricant. Some of the most excellent objects I saw in the show was the account book of a New York brewer supplying beer to various units during the American Revolution (63rd of Foot in there, no surprise, as well as Provincial Taylors!), images of the Atlantic Beer Hall on the Bowery, and hand-painted beer trays from the late nineteenth century.

There’s a small beer hall at the end of the exhibit. At first consideration, my collection care radar thinks that this bit of access to “the material” tips the balance of preservation. Still, there appeared to be a fair amount of controls to prevent creating a museum preservation problem (i.e. bugs). The tasting events did sound to be a bit expensive for what was offered. I’d say go to the Pony Bar instead, and enjoy amazing American craft beers for the very reasonable price of $5 each.

Check out this blog on Klein Deutschland and the Lower East Side for extra information about the German-American influence on New York City, and to enjoy some great photography. 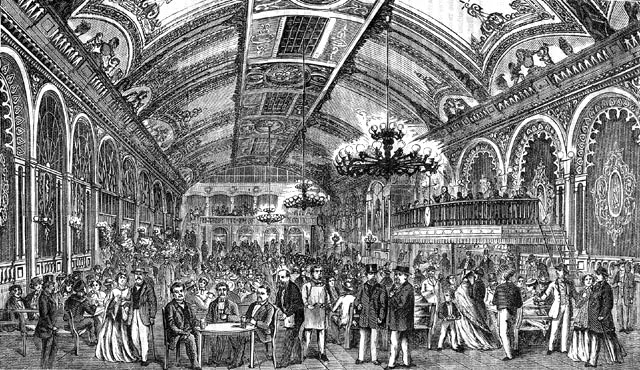 How about switching up the sports bar scene and drinking in these environs? Atlantic Garden, at 50 Bowery, c. 1870. NYPL Digital Library Archive.