Sorry for the pun. 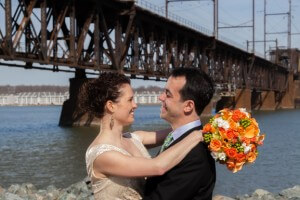 Since I was a little girl, driving into Havre de Grace meant curving around the high stone embankment to the right and passing under the hulking iron bridge that carries the Pennsylvania Railroad over the Susquehanna: it’s been doing so since 1906. That bridge says Havre de Grace to me like little else; so much so that some of our wedding photos are in front of it. 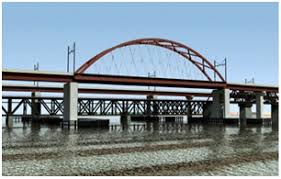 Amtrak’s Vision for the Northeast Corridor document outlines future plans to provide improved service from Boston to DC, and beyond. With increased ridership over the past decade, the two-track bottleneck over the Susquehanna is slowing things down. I’m hoping what I see in the image (left) is the old bridge standing behind the new, each carrying two tracks a piece. Still, what on either bank of the river would have to make way for construction of such a bridge and its increased trackage? Long a site of ferries, canals, and bridges of varying incarnations, the 1906 bridge is hardly the first (check out the double decker bridge that sat beside it until the 1940s in a postcard here). It’s evident that rail is the quickest way to move up and down the east coast, especially as airport delays lengthen, and the railroads replace old track with concrete ties and seamless rail. It used to take me 3.5 hours to get from NYP to BAL – now it only takes 2.5.