Recently, my friend Ms McC and I travelled to Maryland for a eighteenth century event at Fort Frederick State Park (see my posts on nearby Hagerstown and the CCC Museum at Fort Fred). Being like-minded in our love for the American experience, we targeted Pottsville, Pennsylvania as our stop-off point: home to Yuengling Beer since 1831. They claim the title of “America’s Oldest Brewery.” Check out the history of American ale and beer making via the New York Historical Society’s exhibition Beer Here and my post on the exhibition. 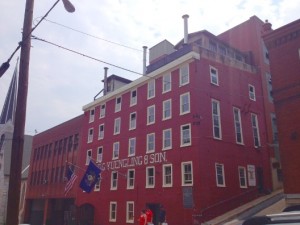 While I wouldn’t call Yuengling craft beer  (Saturday afternoon took us to The Pony Bar on Manhattan’s Upper East Side with Chicago-based Mr. W and Ms. S – wonderful American craft beer mecca that coincidentally opened their 2nd branch three blocks from our home), it is good beer, and a great story. Their Pottsville operation is hardly their major producer today (their large plant is in Tampa), the physical fabric of the building tells the story of enterprise, early American industrial architecture, Prohibition, and, well, beer.

I found Pottsville to be much bigger than I expected. I wasn’t there long enough to understand the town fully, but it had a downtown district of some heft and a great expanse of neighborhoods filled with buildings harking from various parts of the 19th century. My ever-vigilant transit eye noted that their central train line was defunct. SEPTA assumed these non-electrified lines, formerly operated by the Reading Railroad, and discontinued all diesel engine service in 1981. The funds were diverted into – you got it – highway funding. The rail lines and bridges have deteriorated from 30 years of reduced use. Nothing brings on downtown atrophy like the loss of rail commuters and transportation analysts can’t hard avoid the truth that no replacement bus line will do: a train passenger is not a bus passenger. (same for streetcars!) Note Frederick, Maryland – it was a pit in the 1980s; reinstated rail service in 2001 brought in Washington D.C. commuters, and fueled much re-energizing of that town through the aughts. Pottsville can be brought back. Also, check out the Delaware Valley Association of Rail Passengers blog. 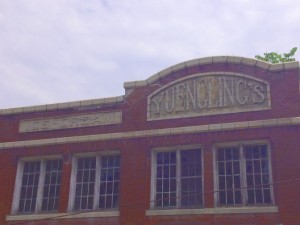 The Yuengling brewery building from the late 1830s juts forward from a steep hill above the business district at 501 Mahantongo St (the original building was lost to fire). From that central historical building, Yuengling pieced on additions as their operation grew. Their hillside location was intentional – a series of burrowed caves beneath provided climate controlled storage well before the era of HVAC. During Prohibition, the Feds sealed most of the caves, and Yuengling squeaked by like many brewers, making root beer and ice cream.

The free tours through the complex take you through the caves, past brewing equipment, and past the Rube Goldberg beauty of a 1950s bottling machine, clinking bottles along toward their destination. And of course, you get to enjoy beer at the end of the tour.

If you are a hard core craft brew fan and Yuengling is a bit too “The Man” for you, then go to enjoy a bit of American industrial industry. 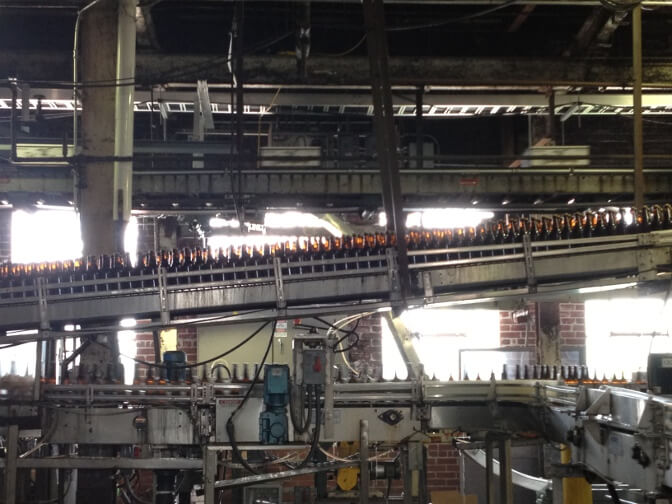 Old bottling equipment in use at Yuengling Brewery in Pottsville. Incredible noise and ingenuity – love these machines. RL Fifield 2012.