People generally know one thing about Johnstown, PA: the flood. The Johnstown Flood National Memorial is located on the rim of the former recreational lake that burst on May 31, 1899 and spilled 20 million tons of water into the town below, killing 2,209. The local Johnstown Flood Museum is located in a former Carnegie Library, a building built to replace the original library destroyed in the flood.

The Johnstown Inclined Plane, a motorized lift scaling the steep hill in the center of town is not the primary reason people visit Johnstown. Built in 1891 to develop the upper part of town, the Inclined Plane provided transit to workers in Johnstown’s steel mills.  It’s the steepest vehicular lift in the world – the cars can take an automobile. It’s also fun to ride – I was surprised how quickly the cars careen up and down the hill.

On the day I visited with Ms. McC, and Mr. and Mrs. S, I noticed town residents using the Inclined Plane to return library books and reach the park on the top of the hill. You pay your fare and then enter the large car. A narrow space with a church pew accomodates riding passengers on the left. A large pen to the right holds a vehicle or other equipment. The Inclined Plane feels handwrought, of another era, and yet one of the most solid pieces of engineering I’ve seen. It is specific to this place. It’s one of those many things on the way between Point A and Point B. 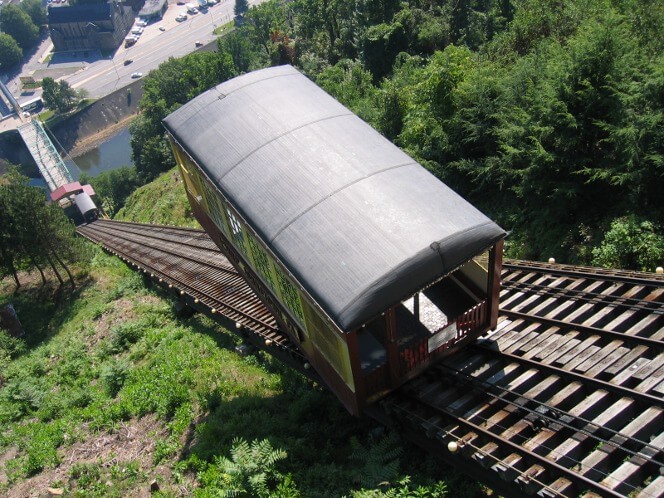 The cars move in opposition to each other, passing with a swoosh mid-hill. RL Fifield 2008.