Much of NYC’s life takes place underground. Last Tuesday was a holiday for my place of work, and I used the morning to get some errands for some projects done. On the subway, sometimes you are just traveling. This is what most commuters do, enter a sort of stasis between work and home. You might people watch, which is certainly an urban pastime. There are the colorful, the rude, the homeless, the people asking for money. It’s not as “heads down, me against the world” as some elsewhere-dwellers have described their perception of New York.

On the R train between Times Square and 8th Street, a group of older gentlemen sang doo wop. I always give to musicians on the trains. After the men strolled their song down the car, a tall blonde woman in red lipstick and wearing black walked in. Two women sat opposite. “Are you a model?” they asked her. “No, no,” said the woman. “We’ll, you should be.” “I’m only 5’8, too short,” she replied. The ladies across the car shook their head and continued along in their conversation, expressing disbelief repeatedly. 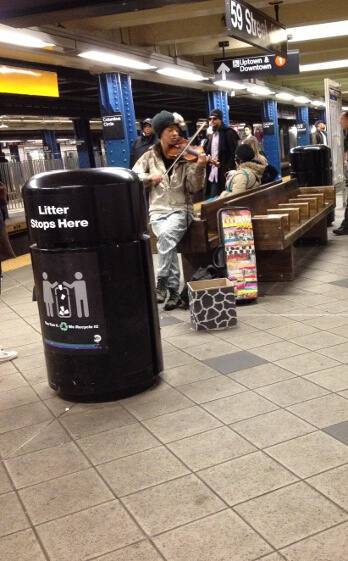 Beauty and Trash. At Columbus Circle. Great job on the case. RL Fifield 2013.

Tuesday was a day for music. An incredible violinist played at 59th street Columbus Circle as I waited to switch from a B train to a C train. You know you are good when people gravitate down the platform to hear you play. My fellow passengers stopped, as if in shock, and turned their face to her. In that moment, the trains fell still, as they sometime do, and the platforms were  filled with the song of this one violin.