Ever get that lovely hand-stitched shift near completion, and then realize:

“Crap. I put the shift sleeves in the wrong way.”

Out comes the seam ripper and it feels like your best-looking stitches ever are screaming as the blade slices them away. After a few other choice words escape your lips, the shift goes hurtling into the work bag. You rediscover it 3 months later, and you can’t remember why you didn’t finish it.

Margaret Tonner’s shift sleeves were probably set in with the flat felled seam allowances facing outward. I think many of us can commiserate – how often have you felt like slapping that cuff on that wrong-set in sleeve, and just getting onto a more interesting sewing project? In her master’s eyes, the mistake on her shift sleeve was apparent enough to list it as an identifying marker for her recapture in this runaway ad from 1765.

RUN away, on the 28th of September last, from the Subscriber,
living in Lampeter Township, Lancaster County, a Dutch Servant
Girl, named Margaret Tonner, about 22 Years of Age, of a dark
Complexion, thick and chunkey made; had on, and took with her,
a striped Lincey Petticoat, one shirt Gown of Ditto, the
Sleeves of the Shift she wore were wrong set in, speaks pretty
good English, and supposed she stole and took with her a
grey Horse, about 10 Years old, carries well, travels, trots
and runs well, blue Cloth Saddle, about half worn, and a
Snaffel Bridle, with a Tape Browband; it is supposed there was
a Man went in Company with her, that formerly lived in
Lancaster, named George ‑‑‑‑, of French Extraction, as he
absconded at the same time, and it was known they were
acquainted. Whoever takes up and secures said Servant and
brings her to her Master, or confines her in any of his
MajestyGoals, so that she may be had again, shall have
forty Shillings Reward, with the Horse and Saddle, or Twenty
Shillings of either of them, with reasonable Charges, paid by 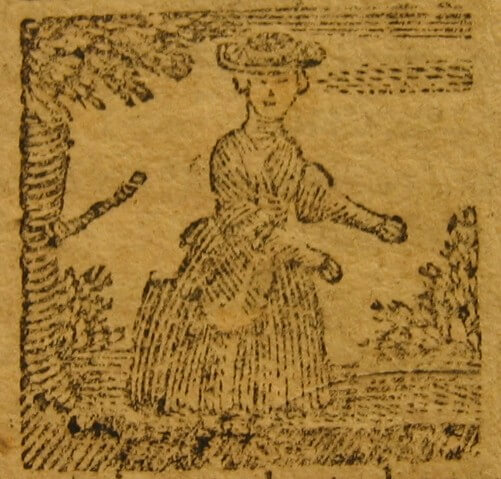