Home→Architecture→Wanderlust Wednesday: Taking The Back Way – Old Roads from Point A to Point B

There were two ways to get to Mom Mom and Pop Pop’s house in Havre de Grace. You could either take the interstates skirting Baltimore, which, until the late 1980s, had not all been built and required cutting through Reisterstown’s Main Street or Worthington Valley in Baltimore County.

Or you could take the “back way.” Usually this let up a series of quiet groans from the kids.

The back way meant a half hour longer in the car. It meant queasiness as Dad drove over hills. It meant….. green pants territory!! (a deeply wooded and wondrous section outside Hereford, Maryland, where my mother would have me look for Dr. Seuss’s Green Pants). But to think of those drives now, it’s the back way that has the memories.

We would drive up through Hampstead, past an old school. Through Hereford. Through a few very old buildings in Monkton, before it was thronged with bicyclists on the Northern Central Railroad bicycle trail to Harrisburg (could still use a rail line there, folks). Past an outrageously lavish Arabian stud farm with a gate at the road (nobody had gates then in rural Maryland, it seemed silly, at least to a 7 year old). The hulking brick Black Horse Tavern outside Madonna (a town I found to have a very funny name in the 1980s). We remember getting detoured due to a house on fire. And driving by orchards. There are photos of Mom walking a tummy-sick me by the side of the road.

Interstates are devoid of these memories. I think they’ve contributed to our deteriorating lack of imagination and ingenuity as a culture. The systematic exits and entries, the gray concrete, the dotted lines, all mashing into a bland pap of the time in between living, time lost where we gain no substance.

Take the back way. Just take it easy on the accelerator on the hills. 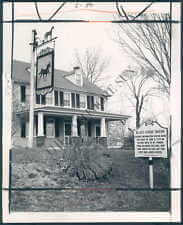 A Baltimore Sun image for the Black Horse tavern in upper Harford County, yet another place George Washington slept.