Better known as the PATH, the Hudson and Manhattan Railroad began shuttling passengers through its cast iron tunnels between Manhattan and points in New Jersey in 1908. My travels have been constrained in the last couple of months due to pregnancy. I haven’t been on a plane since October and my last trip out of the country was a 12 hour jaunt to Montreal in September. I’ve even turned down trips to Paris! Our radius of wanderlust has been increasingly contained within slowly shrinking circles centered on Manhattan’s Upper East Side. Last weekend was our probably our last adventure out of the city for a bit, as we travelled over to Hoboken, NJ to see the expanding Family C-R in Hoboken, NJ.

I wrote a couple of years ago about the PATH and Hoboken station, before the damage of Hurricane Sandy. I will never forget my bleary eyed shift on my institution’s emergency response team, listening to news reports of fires in Breezy Point and flooding of train tunnels, including Hoboken’s PATH and NJ Transit (Lackawanna) stations. It was my first trip over PATH since the lengthy partial restorations to get them operational.

I find vintage photographs of the Hudson Manhattan tubes fascinating, polished, cutting edge before a period of stainless steel fluorescent decline. Compared to the utilitarian appearance of so much of the NYC Subway, PATH was built with the elegance of a turn of the century rail enterprise. What strikes me about old images of the PATH is the elegant finish of the cars and the ornamented capitals below the vaulted ceilings of the stations, still visible in stations not completely restored [read gutted] in the Port Authority era. 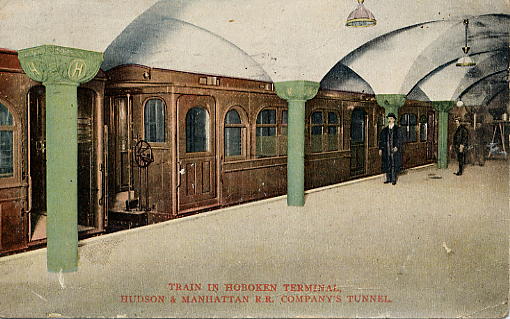 Postcard, Hudson & Manhattan Railroad at Hoboken Station. The capitals are still visible today. Anyone know of preserved Hudson and Manhattan cars in any museum collections today?

I’m looking forward to getting out and about in the New Year with our little guy in tow! Entrance to the tubes in the no longer extant Hudson Terminal building in downtown Manhattan. It was demolished to make way for the World Trade Center. I particularly like its advertisement of Pennsylvania Railroad connections, making it a PATH further afield. LOL.