Images of geisha and courtesans are often mislabeled. For those unfamiliar with subtleties in the styling and wear of kimono, obi, and traditional Japanese hairstyles, it can be difficult to differentiate between a geisha, a bride, a housewife visiting friends, a Hollywood fantasy interpretation of a geisha, and a tourist playing dress-up (yes, for a fee, you can be decked out like a maiko, an apprentice geisha). Painting Japanese traditional dress with a broad brush perpetuates misunderstandings of the roles geisha and courtesans play(ed) in the entertainment districts within Japan’s flower and willow world.

The terms geisha and kimono have been misapplied by Western culture to anything from bathrobes to science fiction characters. The western world created confusion of the roles of geisha and courtesans. Lumped together, the nighttime entertainment roles of geisha and oiran (in Edo) and geiko and tayu (in Kyoto) could only mean sex to Westerners. The West was familiar with hierarchies within sex work, from the courtesan to the streetwalker. The geisha, an entertainer who sang, danced, and provided witty repartee while clients waited for their time with with the courtesan, does not have an analagous counterpart in Western culture. Geisha, which loosely translates as “arts person” continue their role of entertainer in the absence of distinct courtesan culture today.

I’ll limit this post to indicate a few primary details in the differences between the dress of geisha, maiko apprentices, and courtesans. There are details in the ornamentation, hairstyle, and how they wear their kimonos that indicate their respective roles.

Geisha, traditionally the arbiters of cool, have always been more austere in their appearance compared to the come-hither tinkling of batteries of hair ornaments and sumptuous fabrics of the courtesan. As the nineteenth-century progressed and modernization arrived in Japan, geisha began to appear more elegant to their admirers, while courtesans began to look tawdry, antique, and cheap.

Today, geisha and their maiko apprentices entertain in exclusive tea houses (read: clubs) and restaurants and are featured on-stage during festivals. Courtesans are now represented by actresses as tourist attractions in oiran parades and tayu reenactment parks.

Here is a very brief comparison of oiran, geisha (known as geiko in Kyoto), and maiko:

Oiran: extravagant hair ornaments and hairstyle, large obi tied in front (easier to untie and retie that way), towering clogs in which she parades in a figure 8 step – this is worth watching! Watch here (the oiran comes into view around 2:00). An oiran parades with a male attendant. She would often be accompanied by teenage and child apprentices. Konstantin Papushin, 2008. CC BY-SA 2.0

Geiko and maiko: Their appearance is demure in comparison to the tawdry oiran and tayu. Both wear their obis tied in the back. Long sleeves and tucks in the maiko’s kimono signify her immature status, even though these teenagers are full-size. The maiko’s more heavily patterned kimono and collar and exuberant accessories will become more subdued as she advances in her career, as can be seen in the geiko’s apparel. Still, the maiko’s embellishments are restrained in comparison to those of a courtesan. They are cute, whereas the courtesan’s appearance is loud. 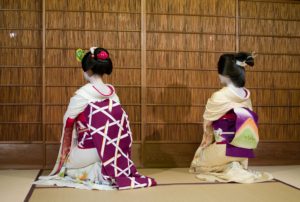 The Maiko on the left has a long obi, sleeves, and a hairstyle revealing a flash of red. The geiko on the right has a shorter obi and sleeves, more subdued kimono, and different hairstyle. CC BY 2.0