Pintxos. It was a tiny hole in the wall on Greenwich Street in a cluster of old storefronts squeezed against the Hudson at the end of Spring Street. Small tables snugged up against benches with cushions and the perfect night there was a soft summer night, the windows thrown open onto the sidewalk. I remember squid ink paella and minerally Txakoli. Other nights held croquetas, heartbreakingly good olives and cheese, and friends I no longer see. The kitchen was the size of my apartment kitchen – just enough space for a cook to stand in one place and reach everything. Chatting with the owner one night, he said the tight kitchen was the most efficient way to execute his craft. You don’t spend time running across the floor to the fridge, the prep space, the stove. It became my philosophy in renovating my 24 sq. foot Manhattan kitchen.

But Pintxos closed many years ago, and while I heard that their chef moved to Cafe Ronda, another favorite tapas space of mine, you never can go home again. When a restaurant closes, so do your memories. Did you ever exist in that space? You can’t visit to reconfirm that joke, that night she said yes, that moment in which you both decided the answer was “no longer.” Pintxos is now a bit of a curled lip and a shrug.

I figured that if I ate every meal in a restaurant in NYC, I would never eat at the same place twice. This is especially true considering those restaurants that are flashes in the pan, opening and closing, and being replaced in short order. Sometimes I wonder at the point of having a favorite place in NYC; given all the options, it seems wasteful to go to the same place again and again. But choice can be too much – many New Yorkers consider five blocks distant from their apartments to be another neighborhood. We’ll haunt our Mexican hole in the wall, Sabor a Mexico, Burger Fi, Om Indian, or the Upper East Side version of the Meatball Shop without restraint. One has to set limits.

One of our first dates took place at Nina’s Argentinian Pizzeria, on 2nd Avenue in the 90s. The project of Italian immigrants to Argentina, their food offered the best of both worlds, incredible pasta, empanadas, sangria, flan, and chewy crust pizza – our favorite was one with chimichurri and meatballs. They greeted you with a soft, garlicky eggplant spread, made silken with olive oil. We bemoan that the owner hasn’t seemed to relocate, but it doesn’t stop us from occasionally Googling Nina’s. It wouldn’t be the same, but couldn’t he have reopened in Brooklyn, or maybe Hoboken? Alas. Those special first evenings can’t be relived. But we’d love to be able to make a pilgrimage to Nina’s to mark the passing of time all the same. 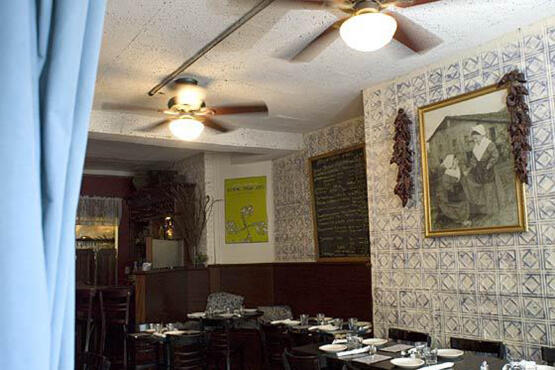 Pintxos, NYC, a tapas restaurant on Greenwich Street. Strong in the memory, though it closed several years ago.