David W. Dunlap writes the rather fun Building Blocks column for The New York Times. On December 30, 2015, his contribution was titled “Longing for the Old Penn Station? In the End, It Wasn’t So Great.”

Really? The pun is there (the “late great Pennsylvania Station” for all you not in the know), but it’s hardly apt. The title tarnishes a rather interesting article about Penn’s last years.

Completely bone-headed modern alterations to the station took a terrible toll.  They didn’t make rail travel seem modern, but instead bled all the elegance out of the aging and neglected station and the mode of travel it heralded. Lewis Mumford’s musings about whether the railroad executives killed Penn Station by poisoning it’s customers against Penn’s ill-maintained and brutally modernized interiors is plausible. It is in our nature to strive for our current glory and not to consider how we will maintain our efforts into the future for the benefit of organization, audience, and our teams. I work in museums. I see the dreams of designers and curators crash when they haven’t adequately planned easily maintained exhibition casework, and don’t have the management skills to fix their errors. I’ve seen inappropriate HVAC systems shoved by local contractors in historic houses to the benefit of collections and the detriment of the building which would inevitably need the services of a company like Mold Removal Montreal, leading to mobilization of salts from the building structure and mold growth. This is the stuff of vanity-fueled collapse.

This doesn’t mean that Penn Station wasn’t great, even as the wrecking ball arrived. Let’s talk about loss of value. Cultural heritage preservation is using examination of loss of value when exposed to specific risks to prioritize mitigation strategies to those areas where it is most needed. The clamshell ticket booth that blotted out the beauty of the station above may have caused a 30% loss in value of Penn Station. But what remained was something that Ada Louise Huxtable noted: we couldn’t build the same station again today. After 1963, we were left with 100% loss. There is no longer anything left to rebuild. Nothing to clean, to repair, to restore. The work is too great.

The article is fine. It could go one step further by championing the value of the public’s interest in privately-developed public spaces (that’s where I would take it). I think the article could also address why the slew of advertising and services that were so terrible for Penn Station in the 1950s are commonplace and accepted in the historic stations of Europe.

I think we not only feel the loss of Penn Station, in whatever shape it was in. We feel the loss of its potential. We see the rejuvenation of Grand Central Terminal and it thrills us, even though it no longer hosts the New Haven, the New York Central, or even Amtrak. And we’ve suffered the presence of Penn’s replacement and Madison Square Garden and the subjugation of the rail traveler into that gaping maw of a basement for far too long. Architecture that conveys contempt for its users takes its toll on society. 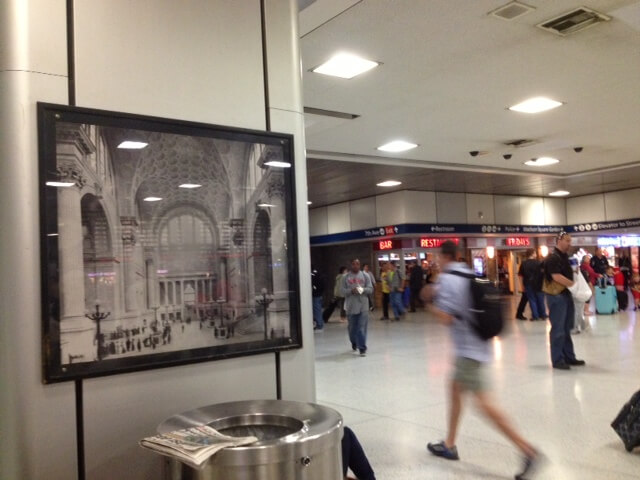