Aiji is a taxi driver. He is also the founder of the first burrito bar in Rwanda and a vegan chef. For right now, it’s the taxi while he’s between ventures. Aiji also seems to be the only taxi driver in New Orleans, as he randomly picked up me and my colleagues again at the New Orleans Museum of Art. 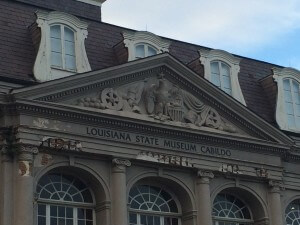 I grabbed a beer in a bar near the opening reception at Republic. A husband and wife (she, the bartender, him, a regular off shift from a top-tier restaurant) talked living blue in a red state (this just before Bobby Jindle was ousted). Throw the freakin’ guidebooks away and put down your phone and make part of your travels about shutting up and listening to local voices.

I stayed in an Air BnB in the Marigny. The apartment was at the back of a shotgun house on Mandeville Street and was completely passable, if a bit worn. A balcony slumped from my windows onto a neighbor’s garden below. A train blew its whistle on the river without consistency, blaring into our sleep. I completely support AirBnB, but this place could have been better for the price. I stayed in lovely apartments in Paris and have had largely good experiences. That being said, I think the sheets on the bed were at least 40 years old, easy. So, I think I will do as eighteenth century travelers did in the future, and take my own sheets. 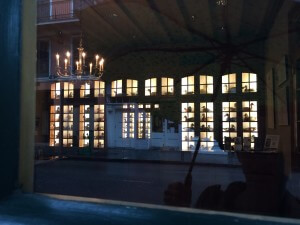 Decoys at night in the entry of the Historic New Orleans Collection. RL Fifield 2015.