One of the unexpected gems is the artistic and scientific wonderment that is the first electric street lamp, invented by Charles F. Brush of Cleveland, Ohio, in 1879. You can see it today in Public Square. Heady with Victorian ornament, the lamp’s ornamentation is a glorification and worship of scientific discovery. I love how vines securing the lamp to the corner of the Key Bank building appear as if they threaten to engulf it, like ivy growing over the bricks. 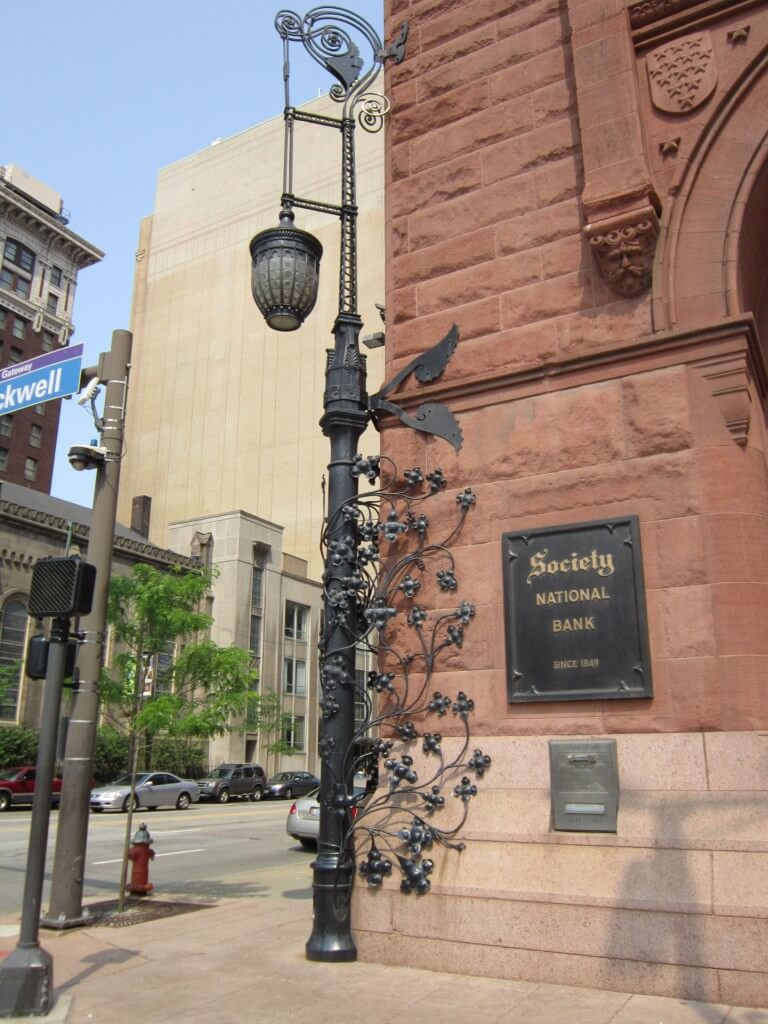 Online databases are incredible tools. While my museum career has mostly focused on textiles, dress, and ethnographic materials, I never know what is going to inspire me when I search mfa.org, metmuseum.org, emuseum.history.org (Colonial Williamsburg), and so forth. I’ve heard a lot of grumbling in the past from staff when directives to get our collections management databases online. “Our photography is old!” “How can we review all the data?” “How will we handle all those research requests it will generate?” The mission of every museum (look at their collection management policies)  is to collect, study, preserve, and educate – and we can do that to an even greater extent by putting our databases online. And communicating that managing and communicating about collections is a work in progress: to remain vital, the museum acts like a living, breathing animal. Our work to document the collection will never be complete.

So I enjoyed tripping over this wager cup in the MFA Boston database. As a collection manager, its an indulgence to delve into the pure joy of collections. I’m often planning at higher levels for collection care. I’ve even been labeled [positively] “content agnostic.” Finding this charming silver wager cup with a wealth of garment details was the result of  searching the mfa.org database. Visit her record here, where you can zoom in on the image. Enjoy the cuffs on her shift,  the trim on her hat, the rosettes on her shoes, her breast knot, the ruffle on her handkerchief, the gathers on her apron, and the ribbon flapping in her face, all executed in silver gilt. 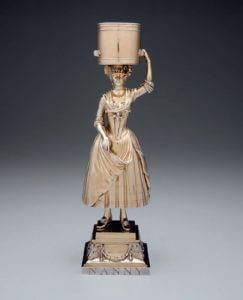 Some old women’s magazines from the 1940s turned up when we emptied my grandparents’ house. You would expect the articles and advertisements to address their ideal audience of conscientious housewives, transitioning from the wood stove of her mother’s generation to the modern 1950s kitchen fantasy, with a little wartime effort thrown in.

This advertisement for Kotex  in the Woman’s Home Companion from May 1942 (15 cents) admonishes the reader not to mope about during her period because it’s her duty to cheer up the troops and keep active during war time.  I love that there’s a whole wartime story line in order to persuade the reader that Kotex will spur the reader onto patriotic action during those trying days of the month.

I’d particularly like to know why the soldier and sailor are wearing frilly aprons while the gal inspects the batter their making – the storyline doesn’t cover that detail! Does this serve as a primary source document regarding little known uniform components? Don’t miss the “Intimate Hints for Girls!” at the end of the advertisement. 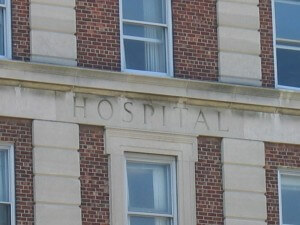 The trappings of the military still remain: Castle Williams, Fort Jay, and incredible turn of the century officers quarters. The stately houses that dot the northern part of the island have 1950s kitchens and peeling paint. Artists assemble installations in them, and collectives sell recycled goods and host interactive art projects within. Any weekend might find people playing on the parade grounds among a trapeze school set up, a growing art installation, or some incredible festival, like the New Island Festival in 2009. A project to rehabilitate New York’s oyster population is active on a nearby dock. It’s a little piece of wonder and dreams in the middle of New York Harbor. 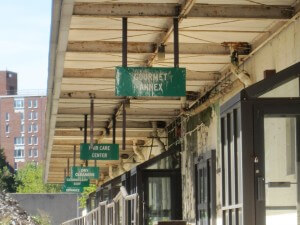 At the southern end of the island, Picnic Point gives you a breathtaking view, from Brooklyn, the Verrazano-Narrows Bridge, Staten Island, New Jersey, and up to Jersey City. There are hulking deteriorating remnants of apartment buildings and the PX from the Coast Guard days that a scheduled for demolition in the redevelopment of the southern end of the island. While they are currently of no use to anybody in their current state, it is a pity to see all that housing unused, that history, however recent, wiped away.

The El still lives on in Chicago – I’m not sure that they could live without it.

But the El once was a vital part of New York transportation, an improvement on surface railways, pre-dating the underground subways, and discarded hastily during the rise of the automobile. The last elevated line in Manhattan was the 3rd Avenue line, at last abandoned in the Bronx in 1973. The Els were noisy and cast shadows on the streets below. There were once elevated lines on 3rd, 6th, and 9th Avenues . The broadness of those avenues explains the activity that once took place above them. It was estimated in the 1940s, you could travel from my neighborhood in the way east 70s to Times Square in 12 minutes on the elevated. Today, that journey would take closer to 35 minutes.

The demise of the elevated allowed property values in New York to sky rocket. There was a value in not looking out your window to see passerbys on a train staring back just a few feet from your window. But the elevated says “city” to me. 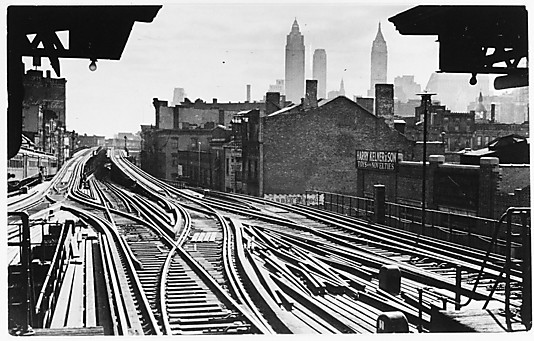 Lewis Hine’s photographs will always remind us of the successes of the Labor Movement. The title of this image is Addie Card, 12 years. Spinner in North Pownal Cotton Mill. Girls in mill say she is ten years. She admitted to me she was twelve; that she started during school vacation and now would “stay”. 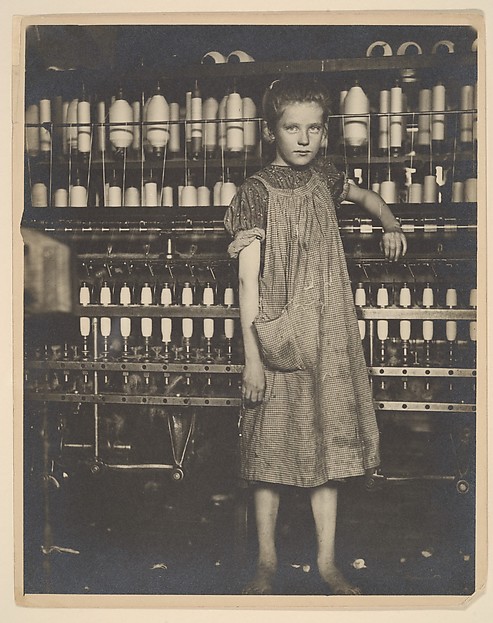 Addie Card, 12 years. Spinner in North Pownal Cotton Mill. Girls in mill say she is ten years. She admitted to me she was twelve; that she started during school vacation and now would “stay”. Lewis Hine. Metropolitan Museum of Art, 2005.100.730.

The garments draped over the racks in the golden scene depicted on this screen raise questions about the woman who left them there. The late seventeenth century kosodes are energetic in their designs of fans and wheels and riotous in color. It’s the beginning of a story, of a search for answers. Unlike so many drawings depicting festivals, dancing, parties, and processions there is no activity in these panels. The viewer waits for the wearer to emerge and claim those things she’s left behind.

I’ll have the Scollop of Oysters, hartychokes, cold lobster, and olive pudding!

Winterthur has in their collections the Dinner Book of Robert Jocelyn, First Viscount of Jocelyn and one time Lord Chancellor of Ireland. The book includes drawings of his daily dinner table, indicating where the dishes of food were placed, and dates from 1740-1751. It’s an incredible document for anyone interested in dining history and eighteenth century foodways. Visit the interactive digital feature at Winterthur’s website.

Yes, Luxembourg is a tiny country, but I wish I’d spent more than an evening there.

In Europe, if you are stuck at the airport hotel, always ask how far away town is. You might be surprised how easy it is to get away from the chain hotel (however modern) and get a good meal and some culture. It worked for me in Amsterdam (10 min. by bus to Centraal!) and it paid again in Luxembourg. It was 15 min. by bus into the city center, costing 1.50 Euro. 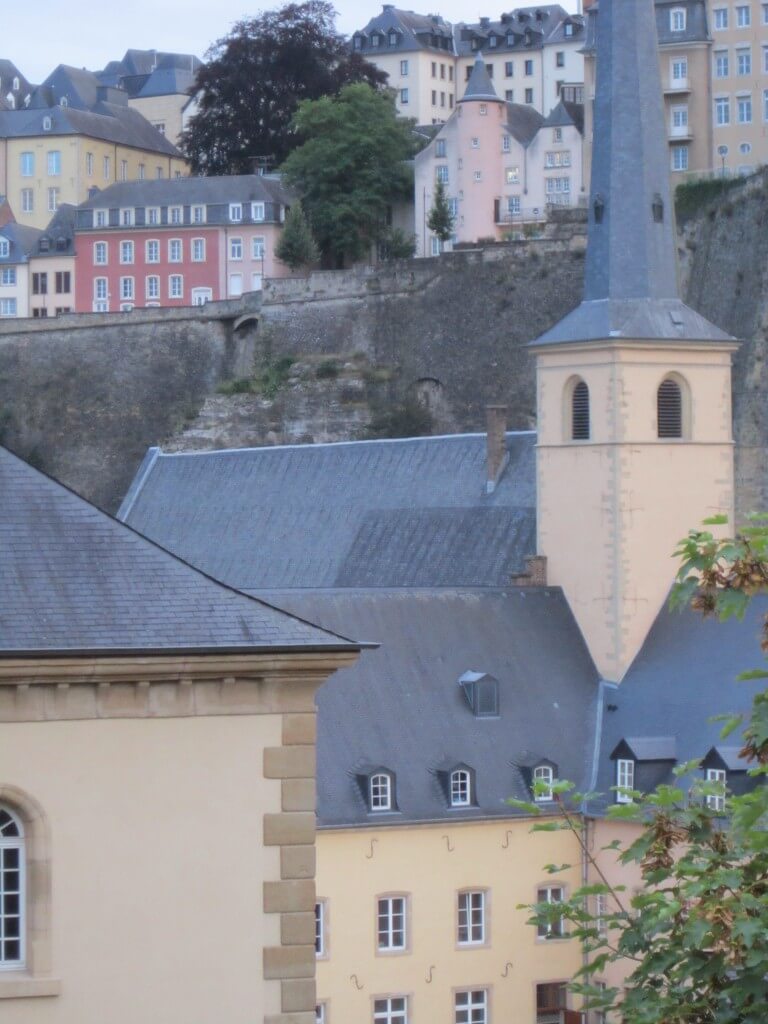 The light was fading fast as I snapped this pic. Luxembourg, RL Fifield 2012.

Luxembourg is a city of cravasses and fortresses, incredible ravines and narrow winding streets with houses clinging to their slopes. Fortunately, there is an elevator in the cliff that takes you from the lower portion of town to the higher rise. I had just come from Germany, rebuilt in a good deal of simple 1950s modern. Luxembourg, in comparison, was like a fairy tale, with lots of money. One friend says no Luxembourger actually works – they just live off investments. Perhaps that’s not exactly true.

The waning light limited the amount of photos I could snap, but there’s more to explore here.

Say it with me: Hauptbahnhof. What a great word “train station” is in German.

I was recently in Germany for work and I had a free day to pop over to Cologne. Unfortunately, it was Monday and nary a museum was open. But I did enjoy using the excellent Deutsche Bahn (German Railway). There were several options of varying costs and speeds, and while I planned to try the zippy ICE (Intercity Express), the timing just wasn’t right. Next trip. 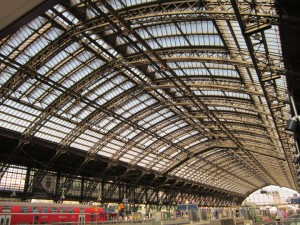 I loved the train shed at Cologne. The arcing glass roof appears to date from train station renovations that took place in 1894. I found myself scratching my head often in Germany. Was I looking at a building that survived bombing? Or a good facsimile? The Cologne train station has heavy stone around the base that appear to be from its 1857 incarnation, when the new unified station was plopped on top of the old botanical garden (alas). The main station building is part of blah 1950s post-war rebuilding and and urban redevelopment. And yet, could the 1894 train shed have survived intact, with the exception of some broken glass?

The whispers of announcements under the iron glass swoop beckoned trains flinging you away from this point, belying the perpetual motion of this place. And I complied.