Home→History→Genealogy→Digging Up My Ancestors – Inbred

This post is a continuation of a series chronicling the relocation of my family cemetery, including my 4th Great Grandparents James Cole and Elizabeth Gilbert, in Aberdeen, Maryland in 2010. Click here to read Part I and Part II.

Charles Darwin and his son, William.

Today, many consider being inbred as more of a joke than a reality. It implies you grew up in the country, perhaps in often maligned West Virginia. But when families stay generation after generation in one area out of which few people move to new territories, inbreeding happens. Charles Darwin and his wife, Emma Wedgewood, are probably the most famous inbred couple. Darwin himself was among the first to scientifically investigate inbreeding, and acknowledged that marrying his first cousin could be responsible for the frequent illness and the deaths of three of their children. This is examined in this article from Bioscience by Berra, Alvarez, and Ceballos. 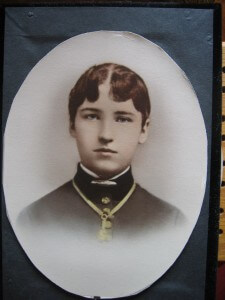 Addie Louise Cole, granddaughter of James and Elizabeth Gilbert Cole. This portrait was probably taken around the time of her marriage in 1886.

After the exhumation, the Cole family remains traveled to Gibb Archaelogical Consulting’s laboratory for cleaning. During this time, I researched the Coles and thought about the identities of the additional remains. You won’t be surprised when I tell you that James Cole and Elizabeth Gilbert were related. Unfortunately, they shared the DNA of not two, but three siblings. James Cole’s father and Elizabeth’s paternal grandfather and maternal grandfather shared the same parents. Undoubtedly, this isn’t the only case within our family, which has stuck close to Harford County for nearly 400 years. 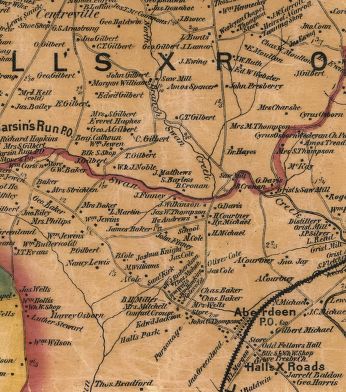 Martenet Map of Harford County, MD, 1878. Library of Congress. Note the Cole family properties just to the west of Aberdeen. The Gilberts are visible just below the large  “LLS X RO” that spells out the Halls Cross Roads area, toward the top of the image.

When you look at a mid-nineteenth century map, you can see that the families’ farms were close to each other. James Cole’s grandfather Thomas purchased the land on Paradise Road in 1757. Gilbert Road, where the Gilbert family farms were located, is not two miles away. As our project to relocate the Coles continued, I found I was related to not only to both genealogists, but also the funeral director. We don’t know anything about the health of James and Elizabeth’s children. We do know that the additional burials held a young woman, an infant, a six year old girl, and an eleven year old. Did inbreeding result in a higher rate of disease and mortality? One British paper notes the link between consanguinity and higher infection rates of tuberculosis in modern Gambia. TB was certainly a health issue in 19th century America, but was not as common in rural areas as it was in cities. This article also suggests that many effects from inbreeding are masked by modern medicine.

Dr. V and I applied for a marriage license in Harford County in December 2011. You may still marry your first cousin in the state of Maryland.

Click here to read the final installment of Digging Up My Ancestors – including a trip to visit Doug Owsley at the National Museum of Natural History, Smithsonian Institution.