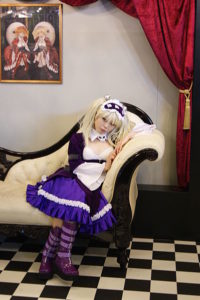 I was minding my own business on Facebook (hardy har), and all of a sudden – an ad for Lolita dresses popped up. Always a fan of Nabakov and a costume historian (and a healthy interest in the foibles of man), I decided to check out the link. As an aside – what, in my ever waning FB use patterns, indicated that I might be a potential consumer of this clothing? I am well over Lolita x 3 in age.

While I’m solidly rooted in the creation of authentic historic reproductions of dress, I appreciate theatrical costuming as well. The role dictates the clothes; the clothes make the role. I’m also well aware of the adoption of “Lolita” to refer to anything seedy and sexual with a youthful bent. I’m not the first to comment on this – check out The Fashion Culturist‘s “Lolita vs. Lolita” post for a comment on the Japanese Lolita “kawaii” (cute) phenom and Pink Chocolate’s Break on the different types of Japanese street fashion. 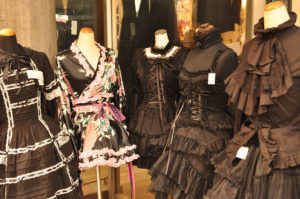 But the clothing is hilarious. Lolita’s rather hum-drum small-town New Hampshire upbringing pales in comparison to her new identity: goth-French-maid-sheep-herder-sailor-wild-West-madam-cocktail-waitress.

One of the first times Humbert sees Lolita, from the bathroom window of the Haze house, he describes her appearance:

“Thursday. Very warm day. From a vantage point (bathroom window) saw Dolores taking things off a clothesline in the apple-green light behind the house. Strolled out. She wore a plaid shirt, blue jeans and sneakers.” (41)

Poor Lo hardly lives up to her tribute.

Check out this Wiki-how on how to “Become a Lifestyle Lolita.” I love number 10. 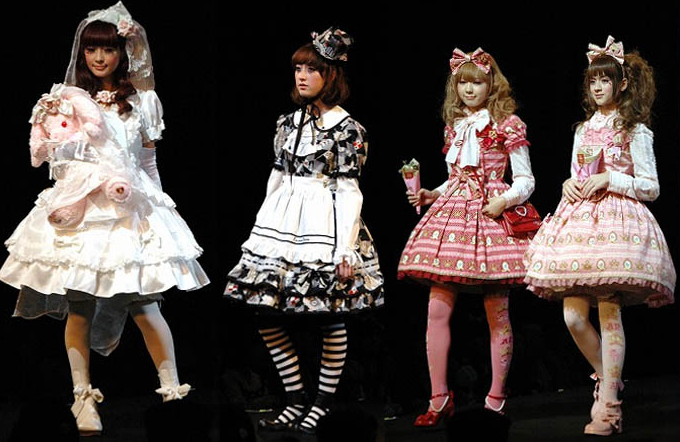 10. Have good hygiene. Remember to always be clean: run a comb through your hair, keep your nails dirt-free and neat, brush your teeth and bathe/shower. When spraying perfume, be sure to use just enough, but not too much. Excessive use of perfume isn’t attractive and does not improve your hygiene, despite popular belief. Being clean is important; being grubby isn’t lifestyle lolita at all, and isn’t pleasing. Never have greasy hair. It is gross and very ita-lolita.

Humbert Humbert himself notes “Although I do love that intoxicating brown fragrance of hers, I really think she should wash her hair once in a while.” (43)

All this would leave Dolores Haze scratching her head.