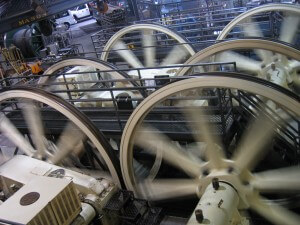 San Francisco is the city where I started to learn to look, compose, and photograph. I feel the town’s scruffiness when I’m there – I still think that the mother lode gold discovery is still expected any day. I suppose the gold rush came more in the form of Silicon Valley, but the city still has turn of the century striver flavor. Maybe it’s all that SRO history (see post here).

At the Teahouse in Golden Gate Park. Some turn of the century throwback. RL Fifield, 2004.

A perfect day in San Francisco for me is to cover as much ground as possible. I once went to the Tenderloin for breakfast in a Vietnamese diner, to the Asian Art Museum, into Japantown, down into the Mission District, up over the hill into Castro, onto Muni and then to a bus into Haight-Ashbury, and into Golden Gate Park, before catching a red eye back to the east coast. I find slivers of neighborhoods where I didn’t expect them. Self-discovery is imminent.  The first time I visited on my own, I was falling in love; the second time I visited, I was falling out. It’s appropriate for a town of boom and bust.

Then I was on the run again, to the Asian Art Museum, past the hoardes of homeless & their counterparts, the shiftless. Shadows of crop circles past. “Hey bright eyes” “Hey, excuse me lady. I like your motorcycle (that was about my boots). “Hey beautiful.”  But a nice farmer’s market has sprung up there. Then over to the cable car line & up to the Cable Car Museum. The huge cranking gears pumping the cables through the channels of the Nob Hill/Chinatown/Russian Hill streets, humming & singing at 9.5 mph from under the ground. I trudged up 2 steep hills to the bus on Sacremento, the California 1, out to get to the Golden Gate and my last goal. The Presidio. It was about 5pm then. Beauty at the bridge, then hooked the free shuttle, which is not scenic, all the time, swinging through the realistic barracks for families of the 1960s, where I’m sure all is heard between neighbors thorugh the warping worn plywood. But then boom, through the grand old central area on the bay of the 1890s, rot and revival occurring in tandem. Hooked the 29 Bus which resulted in a repeat tour of many areas, but then along Curissy Field, where a black lab rolled rapturously on her back in that sea of grass on the water.

And then everybody on the bus! South of the Presidio, three aging Chinese ladies smiled at me for contributing my seat, for which she offered to hold my heavy-looking bag on her knee.