A pie lays broken in the street, a distraught servant teased by the chimney sweeps who caused her to drop it. She’s likely on her way back from the bakery to which her mistress sent the pie to be baked.

While the British had an extensive print culture in the late 18th century, Americans did not. Depictions of 18th century American laboring classes are exceedingly rare. While the Jersey Nanny has been studied as a depiction of an American servant, its artist, John Greenwood, was mostly a copyist of British works. A few years after the publishing of the Jersey Nanny, he left the colonies to train in England, and never returned. It’s not that American colonists would find her appearance largely different from working women in their community, but it is probably not truly an American image. Charles Wilson Peale, on the other hand, was an accomplished painter (much more so than his limited printmaking efforts),  depicting a truly American scene. 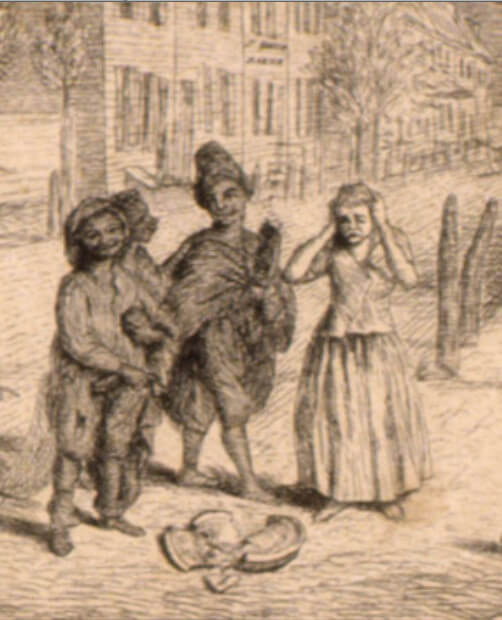 The servant depicted in The Accident in Lombard Street wears no stays, a short gown pinned askance, and a petticoat (the fullness probably assisted by another underneath). Patterning of her clothing may depict striped fabrics commonly worn by servants. She’s very crudely rendered, so that details regarding her headdress and footwear (if any) are hard to read.

The servant in this image is a perfect analogy for what we’ve lost in our understanding of working dress of the 18th century: the details. Learn more about my study of working women’s dress through newspaper runaway advertisements here.