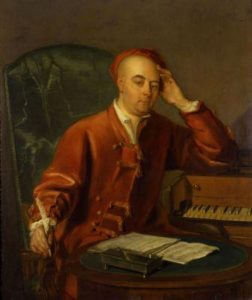 The Messiah, written by George Frideric Handel in 1741 and first performed in Dublin before its launch in London, was originally meant for Easter. Many of us have attended the oratorio’s performance at Yuletide, a practice that gained popularity in the United States in the early nineteenth century. My first and fondest memories of The Messiah are not of it in performance, but listening to my Dad play a record of it on the hefty hi-fi as we opened presents and ate dinner (and let me tell you, that Sylvania hunk of metal really went up to 11!). When our family lived in Wisconsin and drove in a huge van back to the east coast for visits, one memorable family sing of “O We Like Sheep” occurred as we wended our way through the pastures off the side of the Pennsylvania Turnpike. Read more about Handel and The Messiah in Jonathan Kandell’s Smithsonian magazine article.

With John Styles’s book The Dress of the People and the exhibition Threads of Feeling, I became familiar with The London Foundling Hospital. The Foundling was established in 1739 by sea captain Thomas Coram. In this era before reliable birth control, widespread and devastating infectious disease, and few options for many poor parents, Coram sought a way to protect those abandoned babies he saw left in the streets of London. The Foundling ran as an institution until the 1950s, and still continues as the foundation Coram today. Both Handel and painter William Hogarth became early patrons of The Foundling. Handel quickly launched The Messiah in London after its test run in Dublin. Handel never married, and whether he ever had any children is unknown (Coram and Hogarth, though married, never had any children). In 1750, Handel began an annual benefit concert of The Messiah in the Chapel of The Foundling Hospital. These annual concerts continued through Handel’s death in 1759, and the piece was performed each year through 1777. It is estimated that Handel’s charitable giving to The Foundling is approximately £500,000 in today’s money. The Foundling Museum in Bloomsbury holds the Gerald Coke Handel Collection, including an original copy of The Messiah, manuscripts, libretti, and other works.

While not written specifically for The Foundling, Handel’s later involvement gives new meaning to “For unto us a child is born.”