What happened to “less is more”?

Dr. V and I are preparing for the arrival of our little guy Spud sometime in February (yes,  you can expect a good deal of silence from me about that time). As I’ve described in previous posts, we live in a 450 square foot one-bedroom apartment in the Cherokee Apartments, a landmarked apartment building on the Upper East Side. The building was constructed by Mrs. William K. Vanderbilt for working class families where at least one member was suffering from tuberculosis. Today, the neighborhood is a lot more toney, but families still cram into the small apartments to take advantage of good public schools and riverside parks. 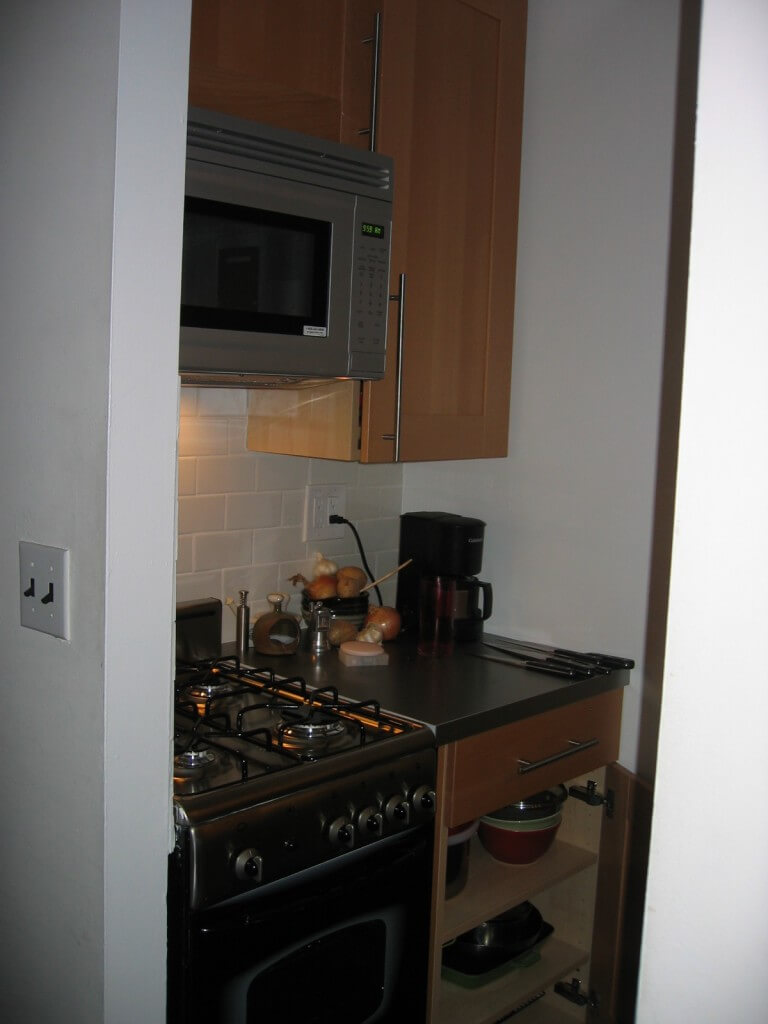 Here is the best shot I could manage of one side of my 24 square foot kitchen after its renovation. The other side has a large bar sink and an under counter fridge, as well as cabinetry overhead. 2009.

New Yorkers spend a lot of time on Apartment Therapy and other blogs looking for that perfect storage unit, compact appliance, or remodeling idea. The idea of a nursery filled with saucers, bouncers, changing tables, etc. is absurd. When I renovated my kitchen in 2009, I was disgruntled to find that even in NYC, it’s difficult to find mid-range but small appliances and furniture. This is based on the assumption that if you can afford that extra 200 square feet, you’ll buy a 30″ range like any other decent, single-family house-dwelling American. Nor did I have the $16-17K quoted to me for special sourcing of appliances to fit my small kitchen by a designer. All I could find was a cheap and tinny Hotpoint, or a 24″ Viking range, out of my budget, and still too big for my efficient but 24 sq. foot kitchen. But it’s not that good quality in small sizes doesn’t exist; it’s just that only the bloated appliance sells in the US. I went to Cambridge, UK for a wedding in 2008, and saw my dream: a 20″ Electrolux range with double ovens and a glass cover over the burners so the space could be used when you weren’t cooking. Alas, my budget wasn’t so roomy that I could have the whole thing rewired for 120V current and shipped to the US. Check out the plethora of small, well-designed 20″ stoves (and the beautiful SMEG ranges while you are at it) at John Lewis.

There’s a linkage in the US between square footage and moral superiority; small is necessarily lesser. Small appliances assume “college,” “starting out,” or “poverty.” And therefore, in the US most of the offerings are necessarily cheap. Unbelievably, even Home Depot in Manhattan stocks the same appliance offerings as they do in their more rural locations.

I think of the US as the birthplace of industrial design. I saw a 1965 Rambler Marlin on the street the other night and its lines were out of this world. The modern cars around it caught no such attention, having no such detail or beauty. It’s difficult for me to find details to marvel at on many American-made mid-grade appliances and furnishings. Furnishings have continued to bloat in order to keep up with the average modern bloated development house. How do we get that heritage back? How do we continue to grow living smaller and better? (while you are at it, check out my post on the Not So Big movement)