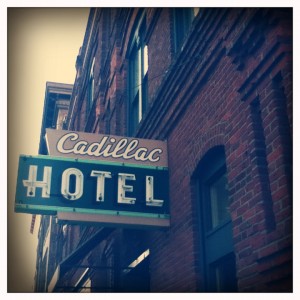 Brilliant sun and a cloudless sky marked my days in Seattle. Like San Francisco and Vancouver (see my post here), Seattle has that feeling that the gold rush just went bust. Yes, it is a highly successful town, but there’s something seedy about it – the SROs, seedy hotels, wanderers.

Pike Place Market was full of tourists. I found Piroshky, Piroshky, a Russian pastry place, where I could have a more savory breakfast, picking a sauerkraut, cabbage, carrot, and onion stuffed piroshky from among the heady goodness on offer. But beyond the market, I’m not sure where the tourists went. 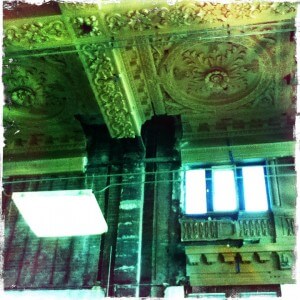 Beauty emerging from behind the dropped ceiling. RL Fifield 2012.

I wandered to the train station, surprisingly getting two for one. The 1906 King Street Station, out of which Amtrak’s Cascades, Empire Builder, and Coast Starlight trains operate, was getting a much needed makeover. Inside the waiting room, acoustical tiles had been removed from the dropped ceiling frame, revealing the incredible plaster work above. I exited the station, staring at a building across the street that indicated a transit past. Union Station, built in 1911, houses a grand swoop of a main hall, as well as the offices of Sound Transit, the commuter service. No trains have called there since 1971. I love that – trains don’t stop somewhere, they call. 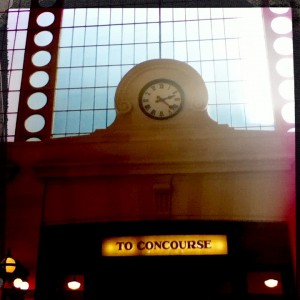 Thankfully, friendly folks at the Seattle Art Museum took those of us working there under their wing, and I got to see more of Seattle. We went up to Capitol Hill (just a ruse, it was named Capitol Hill to lure the Capitol building there, but alas, it didn’t happen) to a bar with an alien art show (complete with interactive abuction lighting foot pedal!!) and to Cafe Presse, French and fabulous.