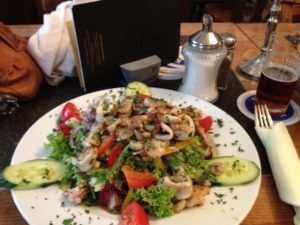 One of many meals I’ve eaten while dining alone. Dusseldorf. RL Fifield, 2012.

I can travel a fair amount for my job. Anyone who travels on business has eaten alone in a restaurant. Some cringe. I don’t. Evening finds me in a restaurant, not eating grocery store finds in my hotel room.

That doesn’t mean that our society gets it. Asking for a table for one can elicit various reactions from the host – they’ve just found themselves down 50% at a table for two. A woman dining alone might also be seated at an inferior spot, thinking that she is embarrassed by her solitude. When waitstaff might ask me if I’d like to sit in a dark corner, next to the waitstaff station, or adjacent to the kitchen door, I refuse. Usually by the time I order, they know I mean business.

I definitely get stares. In Stockholm, I ate at The Pelikan – and incredible beer hall and local cooking establishment. I had an anchovy salad on brown bread, huge pork knuckle with three mustards and mashed swedes (nyuk nyuk) and two beers. Pity I can’t understand Swedish; I saw stares and murmuring from at least two other tables.

Don’t bring your newspaper, a book, or your iPhone to dinner. Dinner is about food, not reading. I sat next to a Canadian woman at Mathias Dahlgren’s Matbaren in the Grand Hotel in Stockholm. We both chose to dine well, and alone. She leaned over to me and pointed out a woman sitting crammed close to the end of the bar, picking at a salad and hiding behind her newspaper. “Isn’t that sad? Why would she come here, choose a boring salad, and not look around her?” (read more about my Stockholm trip here)

The waitstaff are programmed to think the independent diner wants to be served quickly and leave before you’ve been completely mortified by the experience of eating by yourself. Set the pace from the beginning.

I saw this in play at St. John in Clerkenwell. As I demonstrated my inquisitiveness (by ordering the bone marrow and parsley salad and the tripe in white wine and bacon) the waitstaff spoke more to me about what was going on at the restaurant and spent more time with me picking out wine and dessert.