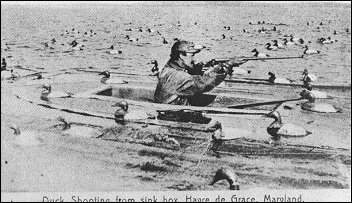 It was popular fare in New York’s turn-of-the-century restaurants. Havre de Grace, located just a few hours from New York on the Pennsylvania Railroad, was a ready source of the fowl for New York City. Boats known as sink boxes were incredibly effective at luring waves of ducks to the table, in combination with late nineteenth century advances in shotgun technology. This combination was so effective that the decimation of waterfowl led to one of the first conservation acts, the Lacey Act, in 1900. Read this article on the disappearance of canvasback ducks by Chris Madson at Wildfowl.com.

From the perspective of my own tidewater Maryland heritage, the only canvasbacks I regularly saw were among my grandfather’s hundreds of hunting and display decoys, made of wood and paint. The same for their widgeon, black duck, and so many other cousins. All I had ever seen were puddle ducks: Mallards. And those AFLAC type ducks. 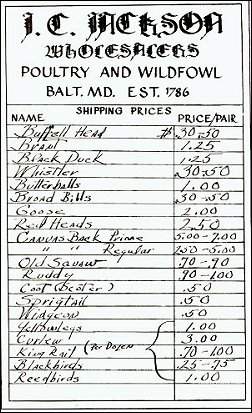 Price list for fowl from J.C. Jackson, Baltimore. How about some vernacular names for ducks on here!  What’s a “yellowlegs?”

A quick search for canvasback duck at the New York Public Library’s What’s On the Menu? project yields several species once offered in New York City’s top restaurants: Red Heads, Mallards, Teals. One recipe for canvasback duck with fried celery (a riff on the wild celery that ducks eat) sits next to a recipe for roast black bear. It was the most expensive item on the Waldorf Astoria’s 1907 New Year’s Eve menu, at $4.50. The sense of adventure and triumph indicative of the Gilded Age extended into elegant dining. But after the Lacey Act, the flock quickly dwindled off the menus.

Here’s a recipe for duck (for once, without fruit!) from Fifty Years in a Maryland Kitchen. 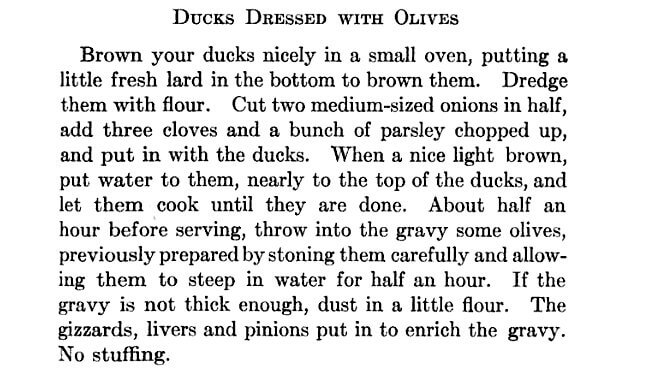